Prime Minister Alexis Tsipras was the keynote speaker at the "National Strategy for Administrative Reform 2017-2019" presentation on Wednesday 30th August, during an event organized by the ministry of Administrative Reform at the Benaki Museum in Athens. Ending patronage hiring and adopting digitizing services were at the core of the government's proposals to overhaul the Hellenic public sector and transform it to an independent, meritocratic and effective public administration by 2020. 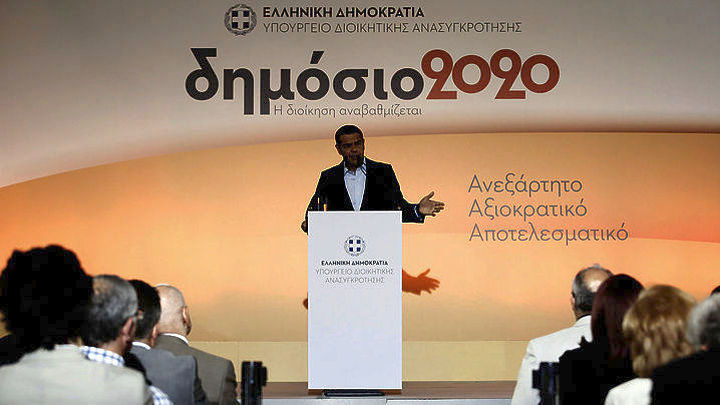 "The reforms in administration will lay the foundations for a state that offers real service to its citizens; a state that will have nothing to do with what we have experienced so far and with what we know so far," he said. "[The habit of] viewing the state as loot and as a tool for clientelism continued for decades until the years of the crisis. The same view of the state [...] appears today in the form of the sly and allegedly liberal cries for the abolition of the constitutional protection of permanence in the public sector" he added. He cited the establishment of the Supreme Council for Civil Personnel Selection (ASEP), the National School of Public Administration and the Citizen Service Centres (KEP) as positive initiatives taken in the past. A further step will be to make Greece one of the first countries worldwide where the licensing procedure for new businesses is fully digitized, he said, and pledged to make all transactions with the state electronic by 2020.

“We are addicted to doubt, it’s a reflex, when political leaderships announce a public sector reform,” said Administrative Reform Minister Olga Gerovassili, promising that by 2020 the Greek state sector will be independent and de-politicised.Tsipras also noted that the Minister of public administration, Olga Gerovassili will announce a new series of written exams in mid-2018 to employ graduates in the public sector and announced the government's measures against brain drain.

With information from ana-mpa and Reuters