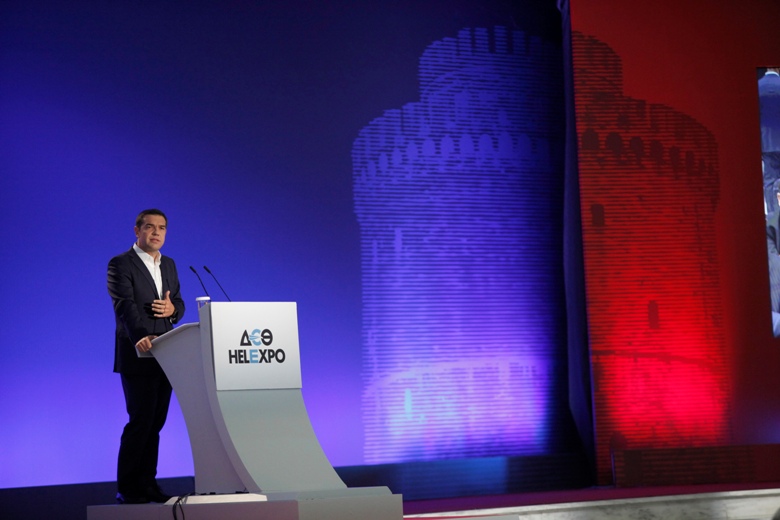 Prime Minister Alexis Tsipras stressed the need to discuss Greece's future and the road to growth that lies ahead in his opening remarks of the traditional Premier's state-of-the-economy address on the inauguration of the 82nd Thessaloniki International Fair (TIF), this Saturday 9/11: “We set up policies and institutions that will guarantee that Greece will not return to the past exit from the memorandum. The time has come for our youth, workers and the entire country to quicken their step. We will not allow a return to the Greece that went bankrupt. Our duty is to create a new Greece, of equality, meritocracy, social welfare state, stability and trust. To create institutions that will be able to protect what we call public interest,” he said.

The premier noted that the restoration of confidence in the Greek economy and increasing investment interest for Greece, this transition from the Grexit to Grinvest, was not accidental, but the result of planned institutional interventions and fiscal policies as well as the implementation of a new production model. He stressed the importance of a positive business climate in job creation: "The main way to tackle unemployment is to stimulate growth and to build on the positive momentum of the Greek economy, to improve the business climate and investment”.

"The country's positive outlook is now visible and acknowledged both by our partners and by international markets. We exceeded the program's targets for primary surpluses and this strengthened our negotiating ability. The country has made strides and is becoming a strategic partner of very significant economic powers” note the prime minister. This evidenced by the recent official visits of French President Emmanuel Macron, U.S. President Barack Obama and Russian President Vladimir Putin and Tsipras' own two visits to China.

Presenting the data on Greece’s state of the economy, Alexis Tsipras said that in 2016 foreign direct investments (FDI) hit a 10-year high, while government expects a further improvement in 2017, as FDI inflows totaled 1.4 billion euros in the first four months of the year. The Prime Minister cited the new development law which focuses, for the first time, in supporting small and medium-sized enterprises and has cleared the way for 800 new investment plans worth 2.0 billion euros, which government authorities are in the process of evaluating.

“The positive economic growth rates are an excellent omen,” he continued adding that “Greece, for the third successive year, is the top country in absorbing EU funds. This means there was an inflow of funds worth 11 billion euros in the Greek economy from 2015 onwards, in the fields of energy, transport, business innovation and human resources growth.”

“The med-term fiscal strategy framework envisages an annual increase, of 1.5 billion euros for infrastructure in agricultural production and energy saving programs for buildings until 2020. Greece has managed to secure 2.0 billion euros from the so-called Juncker Plan through agreements with EBRD for Greek SMEs. The government is activating new funding tools which, through leverage, could activate funds up to 3.0 billion euros. “In two years, we managed to complete infrastructure works left uncompleted for decades at a huge cost for the Greek state” .

Alexis Tsipras said public investments will total 1.0 billion euros in 2017, up 25 pct, adding the government’s strategic goal was to operate a public sector equally accessible to all citizens. “Our vision is [to have] a digital public sector in 2020,” he added.

Turning his attention to the completion of Greece’s adjustment program in 2018, he mentioned that with the road map on debt settlement and debt sustainability “we are in a position, with a stable footing, to leave behind the trap of supervision and disastrous austerity”, as shown by the country’s recent successful foray into capital markets.

Other positive milestones were the successive upgrades of the country’s credit rating, the decline of the Greek bond spreads and the increase of economic confidence at the highest levels in recent years.

On the issue of unemployment, the premier announced that 213,000 new jobs created from January 2015 to December 2016 and a total of 263,000 new jobs by July this year. “This is a record number for the last 16 years,” he stressed, adding the unemployment among young people fell by 10 percentage points compared with 2014.

The prime minister announced that the government is working to introduce legislative interventions to protect employees, strengthen employment supervisory mechanisms and redesign funding tools to support them. The government will also soon present proposals to subsidize social insurance contributions for employers agreeing to offer payroll contracts to employees.

Concerning the government’s digital policy, he said 410,000 Greeks have free satellite access to Greek TV stations around the country, while 14,500 households in 47 islands and 72,000 students enjoy high-speed internet, free or with a significant subsidy.

Alexis Tsipras finally voiced hope that Greece will inaugurate the 83rd Thessaloniki International Fair, where the US will be an honoured country free from adjustment programs and outside the strict supervision: “This is our goal and we are determined to achieve this and for the country to stand on its own feet. Next year we will be discussing about how we will all create Greece of the new era.”

The Greek premier made a special mention for the honoured country of the fair, China.
"[It is] A country with a long history, tradition and culture, an ancient civilization, current leader in international developments. We have been related with you in honest friendship and mutual respect for decades. But particularly in the last few years, we keep deepening our cooperation with economic and cultural exchanges. The Thessaloniki International Fair is one more great opportunity to deepen our bilateral cooperation. I welcome you and hope our relations become more and more fundamental, more constructive and friendlier," he said.”