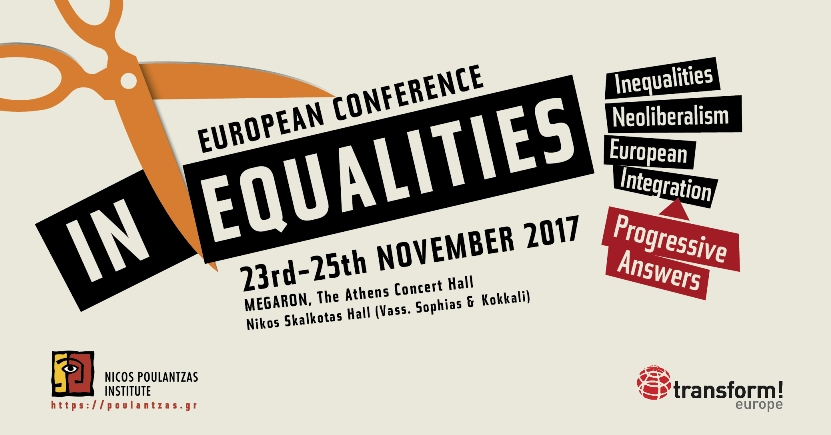 The European conference on “Inequalities, Neoliberalism and European Integration: progressive responses”, organized by the Nicos Poulantzas Institute and transform! europe, taking place in Athens (23.11 – 25.11, at Megaron Athens Concert Hall), will bring together intellectuals from many academic disciplines as well as progressive politicians from all over Europe. The conference will focus on issues such as income inequalities and taxation, industrial relations and labour market inequalities, migration and inter/intra generational inequalities, the welfare state and middle classes in Southern Europe, and the effect of globalization and neoliberalism on European policies.

The conference aims to examine how decades of globalization and European integrationunder neo-liberal hegemony have expanded inequalities, challenging the unity and cohesion of the European Union. Will European integration continue and on what terms? How can the social strata affected by the crisis and globalization be reintegrated into a new social contract that guarantees rights in terms of equality and justice?

Maria Karamessini, head of the conference organizing committee and member of the board of the Poulantzas Institute, told newspaper Agvi (13.11): "This conference is of great importance, from the point of view of the Left, because defending equality and social justice is a matter of principle for us". Karamessini, as President and Governor of the Greek Public Employment Agency (OAED) and Labour Economics Professor, considers that now the time is more than mature "to reactivate the policies that post-war succeeded in reducing inequalities within economically developed countries: progressive taxation, collective labor agreements and labor legislation that protected the worker, the welfare state." She adds: "We need a new social contract, for the new world of globalization, and we have to set it up within the European Union, in order to give prospects for a better future to all its peoples, to the working classes, and most of all to those social strata that have been abandoned and marginalized".

That is why this conference, a wide-ranging discussion of progressive social scientists and politicians from all over Europe has clear the political target of looking concrete proposals to curb inequalities in Greece and Europe as contribution to the creation of social and political alliances of the Left. "To paraphrase an old slogan, if not now, when? And not us -the forces of the Left- then who?”, says Maria Karamessini.

As Walter Baier, political coordinator of the  transform!europe network told newspaper Epohi (19.11): “We need a European New Deal to boost employment, invest in green conversion, eradicate poverty, and deliver effective public services. This kind of new agreement also presupposes the ending of the binding debts and the restoration of national sovereignty. The Left must bring another option to the game, we must learn to perceive Europe as something we share, "our common home", "our community". This could be the basis of the New European Deal for social and ecological reconstruction. This also means a radically democratized European Union. We need a sovereign European Parliament to pass laws that control the activity of the European Commission and the European Central Bank. Only a democratic European Union transformed in this way, protecting the social interests of its citizens, will be able to defend itself from the attack of reactionary nationalism.”