Angela Davis in Athens: "Greece is not alone" 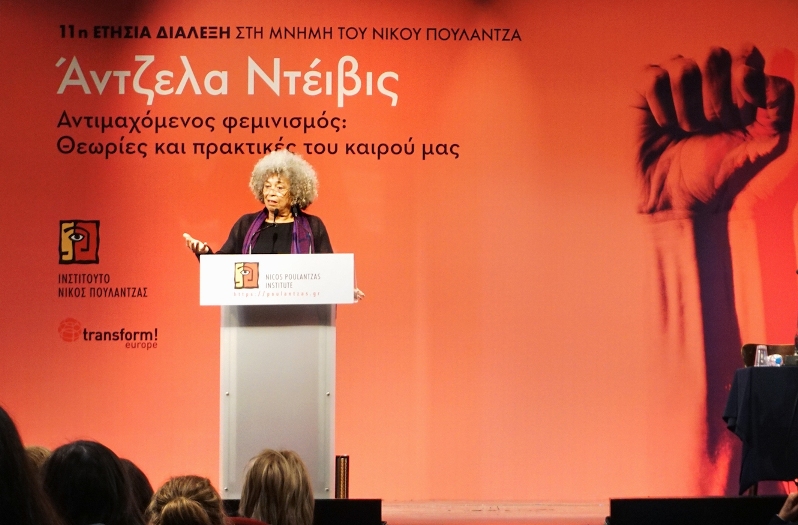 Angela Davis, academic, author and prominent political activist for the Civil Rights, feminist, and prisoners' rights movements, was in Athens for two days (11-12 December 2018) to deliver the 11th Annual Lecture in memory of Nicos Poulantzas, at an event organized by the Poulantzas Institute and the Transform Europe Network.  Delivering her lecture on “Abolition Feminism: Theories and Practices for Our Time” at a packed theatre, Davis talked about the connection between racism and capitalism; how the American trajectory of colonization and slavery is relevant to Europe today; the prison-industrial complex in the US and the refugee crisis in Europe; feminism as a new way to organize movements and finally, the need to show solidarity to the people of Palestine.

Davis begun her speech by stressing how important Nicos Poulantzas' work was in shaping Marxist theory and thanking the Poulantzas Institute for inviting her. She went on to say that she wants to thank the Greek people for their solidarity and support during her imporisonment in the US (1970-1972), when Greece was a country under military dictatorship. Davis was facing the death penalty, and as she said, a very large number of Greek people joined the international campaign to save her life. She was informed of the demonstrations and protests that were being organized in Greece for her, and as she mentioned, she will never forget a message of solidarity she received from Greek political prisoners: "this message, along with a beautiful wood engraving was smuggled to me in the US from a Greek prison; it is a memory I will carry with me for the rest of my life”.

Going on to talk about the refugee crisis, Davis emphasized how impressed she was after her visit to the City Plaza refugee accommodation center, a squat housing refugees set up by activists in Athens, which she cited as “example of an egalitarian community that is run autonomously”, promising to pass on the refugee’s message to the US.

Greece is not alone

The day after her lecture, Angela Davis gave a press conference, where she referred to Greek people’s demonstrations against austerity in 2011 and how they were an inspiration to people around whole world. "People are still looking at what is happening in Greece in order to make sense of the EU: Greece is not alone" she stressed. Davis sent out a message of hope, saying: "When we lose, we can’t simply express our disappointment; we have to keep alive what inspired us in the first place. We have to remember what it meant for progressive forces around the world to be united in hope; that is the only way we can continue and offer new generations the hope of building socialist futures".

For the rest of the conference Davis touched on various subjects: Trump’s administration and the decision to recognize Jerusalem as the capital of Israel; the rise of nationalism in US and Europe; the emergence of a new type of leadership from Black feminist women; the need for a new internationalist movement to defend immigrants and refugees. Her closing remarks were on how so-called “identity issues” movements are vital to democracy  and help us to "re-imagine the universal".

Speaking on what comes after the election of Trump in the US, Davis emphasized the need to engage in "defense and demonstrable resistance", as well as "to formulate more long-term strategies". She pointed out that the two-party system does not work, and that some in the American Left are considering the possibility of building a third political party, one that would be independent of  the corporate structure.

On Trump´s decision to recognize Jerusalem as the capital of Israel, Davis commented that this is a marker of the deep conservatism of the current administration, and a decision that even the most conservative approaches to the Israel-Palestine conflict disagree with: “it was a decision that was designed to provoke violence, create chaos and derail the peace process"; "hopefully", she added "it will also spark mass resistance and more international support for Palestine."

According to Davis, Trump has legitimized hitherto marginalized white supremacist forces, who now can be heard and feel that they have acquired some authority: "The success of Trump´s rhetoric among white people who suffered as a result of global capitalism is evidence of the failure of progressive forces to bring these people to our side."

The rise of nationalism in the West

Commenting on the rise of nationalism and neo-Nazism in Europe and the US, Davis asserted that this phenomenon is not something new, as Europe has experienced the rise of fascist populism at various moments, and especially during the 1930’s. "We have a tendency to want to move on", Davis said, "but these memories are very recent and very much alive as a part of the political culture: we can see that in the issue of Catalonia; there were people demonstrating against the secession by chanting ‘Viva Franco!’". The US itself still has to deal with elements of slavery that should have been dealt with 150 years ago. So it is clear, according to Davis that "we have to come to grips with the historical conditions that produced fascism or slavery, otherwise they will remain with us forever." 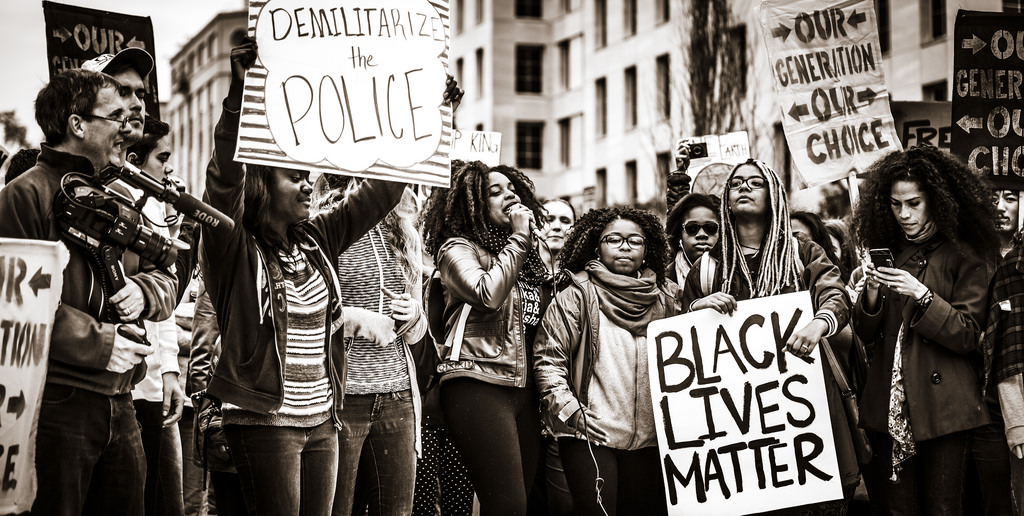 Feminist, queer and Black: A new type of leadership

Greek News Agenda* asked Angela Davis to further elaborate on a point she made during her lecture, that the leadership of Black, queer and feminist women in the Black Lives Matter (BLM) movement, has set a new paradigm for the nature of leadership. This new type of leadership, Davis answered, differs from the past in that it is not the "charismatic, individualistic, masculinist leadership that people are familiar with."

"There are three women who collectively represent the leadership of the organization Black Live Matters", Davis said, clarifying that "Black Lives Matter is actually an umbrella term for an alliance of over 50 youth movements. It is important to recognize that this is a huge movement of young people all over the US, and yet you haven’t seen particular people emerge. So, there is no Martin Luther King, there is no Malcom X: the nature of this new leadership is collective".

According to Davis, we are seeing a kind of "transformative feminist approach, one that is not simply about replacing men with women leaders: it is about challenging the structures of power, challenging the very notion that we need an individual at the helm." Maybe, Davis continues, these new forms of leadership have not been completely worked out, “it is an experiment that is happening right now, and there are a lot of issues". But “what has been so exciting”, she concludes, "is that vast numbers of young people are now participating in this movement for Black Lives; this gives me a great deal of hope, perhaps more than we were able to generate in the 60’s."

A new internationalism to defend refugees and immigrants

According to Davis, while capitalists have been very shrewd in developing their transnational connections, "we have not kept up". She believes that there really needs to be "a global movement that addresses the rights of refugees and immigrants", since what is happening in the US is related to what it happening in Europe and in Africe. "It is very interesting", she pointed out "how globalization is referred to as an era when capital and knowledge move across borders; but then when people start to move across borders, they are declared illegal".

"We have failed to address this issue in ways that both reflect our specific national or regional conditions and at the same time understand that we are building a global movement" added Davies. Hopefully, she posits, "in the future we can begin to create a kind of internationalism and build those global structures as an integral element of our strategies".

The importance of 'identiy issues' movements

Davis concluded the press conference focusing on the need to take seriously new movements that have been de-legitimized by being reffered to as 'identity issues': "We have and to recognize how important it is to address such questions, like ability for example. The disabled movement is very important, it has an impact not only on individuals who are disabled, but on the way we imagine ourselves and our relationship to one another. Race is another one of those issues: it is not only about communities that have been marginalized, but about how we imagine ourselves as human beings, how we develop strategies of challenging mainstream ideology.

So, according to Davies, "the struggle for democracy resides precisely in these communities that have been so historically marginalized. The whole movement for Black lives is not simply about Black lives. It’s about recognizing those who have been most oppressed and most subjugated; when they begin to rise up, then the whole world benefits from that."