PM Alexis Tsipras: Only if Europe changes will it offer a promising future to its citizens

Europe needs to change if it wants to be able to offer a promising future to its citizens, Prime Minister Alexis Tsipras said on Wednesday during a joint press conference at the end of the 4th Mediterranean EU member-states summit in Rome.

"It is necessary to deepen the Eurozone on the basis of more democracy and more social cohesion," PM Alexis Tsipras stressed. He said Europe should not repeat its mistakes and proceed with a bold set of changes. "The issue is not to just exit the crisis but also to prevent the emergence of a new crisis in Europe," he said, adding that 2018 could be a milestone year that will signal the end of the crisis.

"The crisis ends where it first appears, in the South. And it is ending [...] with Greece's exit from the adjustment programs in the coming August," he said.

Commenting on Greece's relations with Turkey, Tsipras noted the need to make the Aegean "a sea of peace and cooperation, without threats, where international law will be respected by all our neighbours."

Earlier in the day, Alexis Tsipras told his Italian counterpart Paolo Gentiloni during a bilateral meeting that the situation in Greece is getting "better and better".

"Developments in Greece, in the economy, are especially good," Tsipras noted. "This was apparent from the state bonds, which dropped to their lowest level in recent years, and developments from now on will continue getting better," he added.

The main aim of the seven leaders is to create a new dynamic for social Europe. The leaders of the Mediterranean countries of the Union are working on a declaration for a more dominant, social and democratic Europe. At the same time, they are going to highlight the need to reconsider the eurozone, promoting a common budget that will be more growth-friendly and democratic.

"Med 7" also supports new initiatives on the labour acquis and social protection, following the Gothenburg summit, with a special focus on addressing the migration issue and with greater solidarity with "front-line countries" such as Greece and Italy.

Source: Tsipras: Only if Europe changes will it offer a promising future to its citizens

Read the Summit's Declaration: “Bringing the EU forward in 2018” 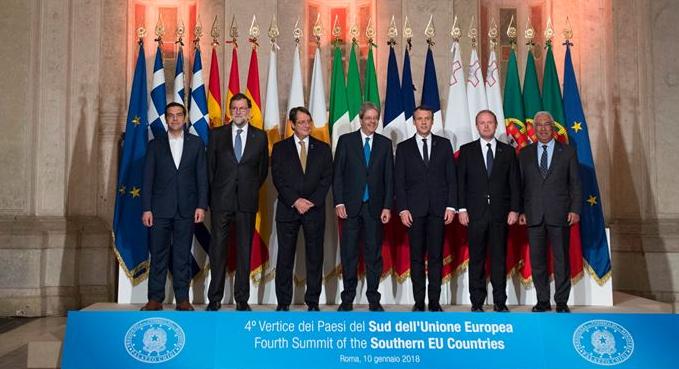