In the course of 2017, the Greek economy’s momentum has been growing on the back of solid implementation of the ESM programme and favorable developments in the external economic environment. Output growth in the first three quarters of 2017 was 1.1% over 2016 and is projected to reach 1.6% for the whole year.

In the second half of 2017, accelerated policy implementation triggered a series of positive-signaling events for Greece:

Besides the rise in confidence, what drove economic recovery in 2017 was rebounding investment, including a dynamic increase in FDIs, robust export growth in the services sector and rising employment that supports private consumption. Output growth should pick up further in 2018, at 2.5% year on year, on the back of the same drivers.

Moving towards the end of the ESM programme (August 2018), financial market expectations are improving, as reflected in the narrowing of the 10-year Greek government bond yield spread vis-à-vis the German bund at pre-crisis levels.

In the course of 2017, the Greek economy’s momentum has become stronger on the back of solid implementation of the ESM programme and favorable developments in the external economic environment. External tailwinds from higher-than-expected output growth in the euro area should intensify in the short-run, amid ECB’s historically low policy rates and next European Semester’s focus on enhancing sustainable, inclusive growth.

Towards the end of 2017, economic sentiment further improved as Greek authorities headed to an early December staff level agreement with the Institutions on the third review’s policy package, only months after the conclusion of the second review in June 2017 (graph 1a,1b, 1c). 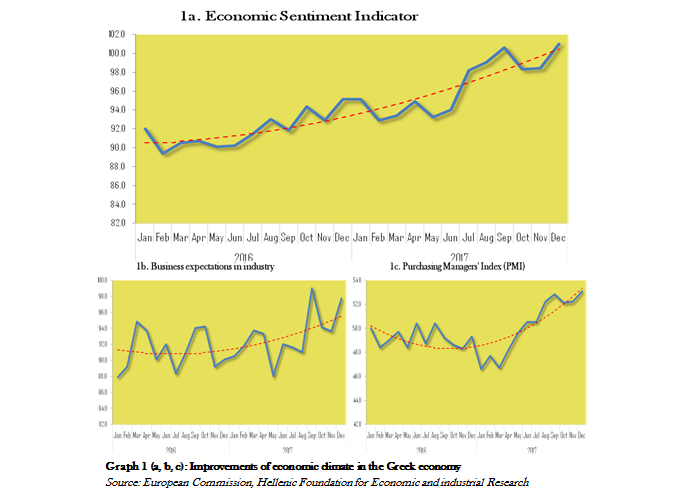 Latest data releases of soft and hard indicators mirror the recovery’s sound footing. The Economic Sentiment Indicator (ESI) and the Purchasing Managers’ Index (PMI) steadily improved within 2017, hitting a record high in December 2017, which signals the sharpest improvement in business conditions and in new orders since mid 2008. On average, the ESI rose to 96.6 bps in 2017 from 91.6 bps in 2016, and the PMI went over the 50 bps that reflect expansion in manufacturing.

Consumer confidence also picked up strongly since the conclusion of the second review in June 2017, improving by 18.5 bps at the end of the year versus the end of the previous semester. Industrial production stayed on an upward climb for the third consecutive year, and at an accelerated pace (+4.4% in the January-November period versus +2.5% respectively in 2016), amid robust paced job creation and a strong increase in exports of goods.

…on the back of sustained fiscal overperformance,

In January 22, 2018, Eurogroup acknowledged the sustained fiscal overperformance over the period 2015-2017 as well as the actions taken on further structural changes. This triggered a political agreement on the third review and green-lighted the release of the program’s fourth tranche upon full completion of the outstanding prior actions.

As economy edges up, Greece is on track to overachieve the General Government primary surplus targets of 2017 and 2018, agreed at 1.75% and 3.5% of GDP, building on the previous year’s primary surplus overshooting by 3.3% of GDP against target. This relates to the net savings of 4.0% of GDP estimated for 2017 under the parametric fiscal measures of the ESM Programme. According to the European Commission’s compliance report for the review, net savings are set to elevate by another 0.5% of GDP through 2018.

For 2017, Institutions project the fiscal overperformance at a minimum of 0.5% of GDP against targets, supported by positive output growth across quarters.

Turning away from a more volatile pattern of economic recovery, a 1.6% annual real growth rate should materialise in 2017, supported by all GDP components. Estimated key drivers are the rebounding investment activity and the pick-up in private consumption, as robust employment growth takes an effect on disposable income of households.

Based on non-financial sector accounts, gross disposable income of households has shown signs of recovery in the first three quarters of 2017 (+1.0% year on year), on the back of rising compensation of employees (+2.2%) and property income (+2.0%), notwithstanding the increase in social contributions payable.

For the non-financial corporations, the investment rate has bottomed out in 2013 and has thenceforth marked a gradual increase. Latest data for the nine-month period of 2017 show acceleration of the rate’s recovery, amid a newly improving gross value added (+3.4% over 2016). 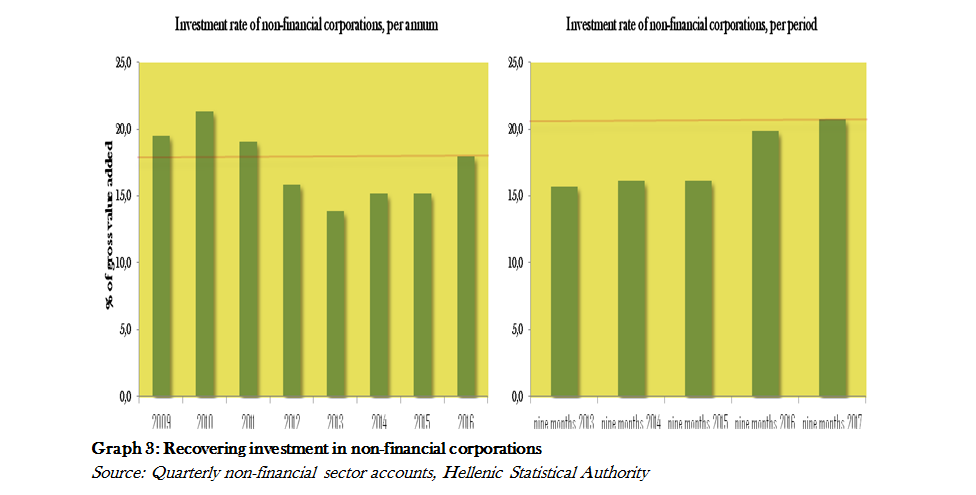 In the whole economy, the investment-to-GDP ratio is set to increase to 12.0% in 2017 from 11.6% in 2016, while the private consumption-to-GDP ratio should reach 68.3% down from 68.8%. This underscores the gradual shift of the economy’s growth model towards an investment-led recovery, supported by dynamically inflowing FDIs and a comprehensive growth strategy that is underway. 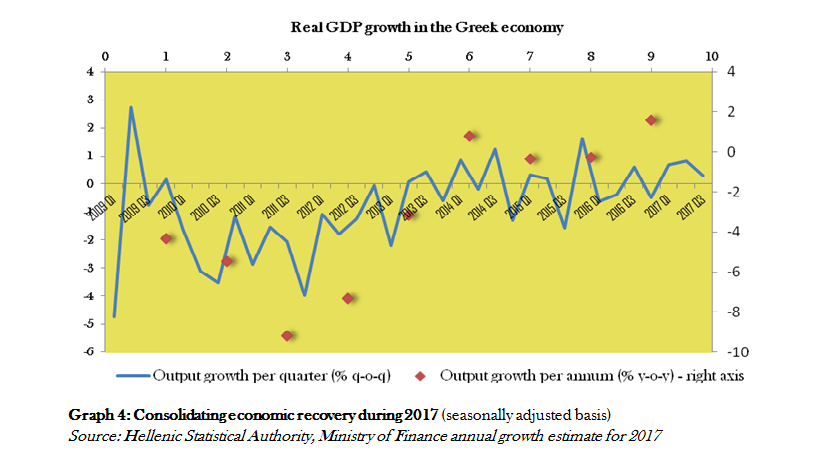 Net exports of goods and services in volume are also expected turn positive in the short-run, mainly supported by net exports of services. Positive contribution from all GDP components should ease public consumption’s medium-term path to modestly positive.

Nominal growth (at 2.5% year on year) is expected to outrun real growth for the first time since 2011, as domestic price pressures rebound mostly due to the oil price hike at the beginning of the year and the increases in indirect taxation. The rise in prices should continue beyond 2017 but stay moderate in the short-run, as core inflation remains subdued.

… and consistent implementation of structural reforms

Under the third review, progress in normalizing the liquidity and payment conditions, as part of the financial sector reform, has come to a further relaxation of the capital control measures and to the reduction in the ELA-ceiling of banks. In 2017, bank credit to private sector enterprises somewhat improved against 2016 (by 0.4%), amid a small rise in demand for loans to small and medium-sized enterprises (SMEs).

On the stock of Non-Performing Exposures (NPEs), latest data point to a gradual decrease in line with the banks’ respective operational targets, which should accelerate as structural NPL-management tools become effective (out-of-court workout, e-auctions, licensing scheme of NPE servicers).

Other objectives across the structural reforms agenda also progressed since the conclusion of the second review, as the competent authorities have addressed distortions in the social welfare system and in the labor, product and energy markets, as part of the third review, next to continuing the implementation of the privatisation programme.

Following three years of favorable developments, the labour market remains on a firmly positive path, supporting domestic demand through private consumption. In the first ten months of 2007, the number of employed persons continued to increase at an average rate of over 2%, while unemployment rate averaged at 21.6% of the workforce, adding another 2.0 pps. of unemployment decline to the 3.0 pps. of the period 2015-2016. 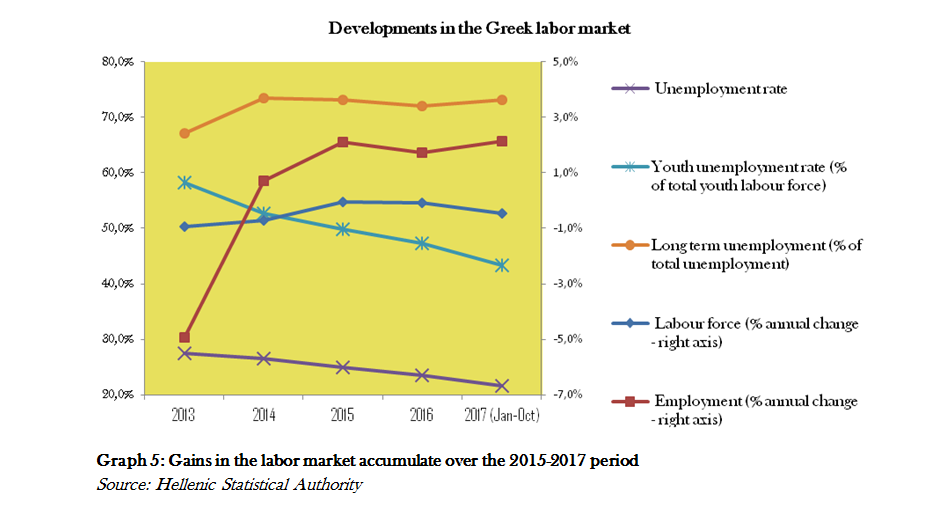 The decline in youth unemployment has also gathered pace compared to the ten-month period of 2016 (-4.4 pps. vs. -2.5 pps. respectively), which if continued could ease inter-generational implications of unemployment. On the other hand, long-term unemployment though slowly decreasing on absolute numbers, remained at a high rate of total unemployment due to the latter’s fast decline. Reforms introduced in the labor market should mitigate the implications of structural unemployment over the medium-term.

Increased employment gains are also set to favor wage developments. Throughout the first three quarters of 2017, wage bill and wage rate have been consistently positive, as opposed to the prolonged intra-crisis decline that relates to the slack in the labour market. Going forward, the wage rate should experience a more pronounced growth than the total employment and the dependent employment rate. This signifies the end of the internal devaluation, which has weighed on disposable income of households over the past years, particularly for people at the low end of the income distribution.

…amid preparatory steps for the Greek economy’s post-programme era…

The closer Greece comes to concluding the ESM programme next August, the more the focus shifts to the post-programme era, and to Greece’s return to international capital markets.

Against this backdrop, Greece has taken action to reduce its financial needs in the early post-programme period. With a view to a smooth transition to financing through the markets, Greece and its creditors have targeted a cash buffer from future disbursements of the ESM programme. Under the current estimate for an unused buffer from the ESM financing envelope amounting to 27.4 billion euros at the end of the programme, the deposit build-up is estimated around 10.2 billion euros.

In addition, Greece has planned on a series of market access exercises under the ESM programme; its first attempt to access the capital markets in three years was marked with success in July 2017, when a syndicated 5-year GG bond of 3 billion euros was issued at a 4.62% interest rate (against 4.95% in 2014).

Next to planning new bond issues in 2018, the Greek bond yield curve has been benefitting from the voluntary PSI bonds swap launched in the second half of November 2017 as part of the public debt portfolio’s liability management programme. The swap, which was characterized as “credit positive” by Moody’s and favored by foreign investment analysts upon its announcement, served to boost market liquidity and attract long-term investors. High participation across categories of bondholders has shored up expectations for the Greek economy, aiding the 10-year bond yield’s decline below 4% for the first time since 2006, and paving the way to a new bond issuance as early as February 2018.

The success of Greece’s early steps to market access have contributed to a series of economic outlook upgrades by credit rating agencies within 2017, from stable to positive (July – August 2017: Moody’s, Standard and Poor’s and Fitch, November 2017: DBRS). In January 2018, Standard & Poor’s has also upgraded Greece’s sovereign credit rating, from B- to B, on the back of the improving labor market and the policy certainty established.

Moving forward, confidence in the economy should edge up amid the successful conclusion of ESM programme and the full implementation of the reforms agenda. Conditional upon these events, medium-term debt relief measures may also be implemented if needed. The Euro Working Group (EWG) currently starts technical work on the related growth-adjustment mechanism.

On these grounds, the economy’s positive outlook is set to strengthen in 2018. Real GDP is set to pick up further to 2.5% in 2018 on the back of private consumption’s growing contribution (0.8% of GDP), robust employment growth (1.7% year on year), marginally positive public consumption growth (0.2%) and a boost in investment (11.4%). The contribution of the external sector is expected to remain positive in 2018 but turn neutral over the medium term.