European Commissioner for Economic and Financial Affairs: The process of debt relief for Greece has begun

After eight years of crisis, the next six months will be the "home stretch" of the memorandum era for Greece, European Commissioner for Economic and Financial Affairs Pierre Moscovici said in an exclusive interview with the Athens-Macedonian News Agency (ANA) on Wednesday.

According to the Commissioner, the "light at the end of the tunnel" is now clearly visible and Greece's exit from the programme will also mean the end of memoranda and harsh austerity "provided responsible fiscal policies are pursued".

"Because many of the programme commitments will continue to be implemented long after the programme ends, there will also need to be an appropriate type of post-programme surveillance in place. But lets be clear: there will be no more 'memoranda'..." he said.

Regarding debt relief for Greece, Moscovici noted that technical work has begun on a debt relief mechanism tied to economic growth and expressed the Commission's support for the discussions underway with the aim of facilitating an agreement "on a credible process to ensure that Greece's debt is sustainable."

The Commissioner also talked about political developments in Europe, including the threat posed by the far right and populism, noting that the EU must choose the direction it takes with care and talking about a "window of opportunity" for further deepening Economic and Monetary Union to build "a stronger, fairer euro area".Moscovici concluded the interview with a message to Greeks that it was "time for a final effort to conclude the programme successfully, and to look to a calmer, brighter future as a resolutely normal member of the euro area."

Read the full interview below:

Let's start with our common home: Europe. Several people argue that the European Union is at a crucial crossroads, politically and economically. The Trump strategy finds imitators on our continent also. At the same time, there is demand for a new balance between austerity and growth. What is your position?

Europe is indeed at a crossroads and we must choose very carefully the direction we take from here on. Economically, we can at last say with conviction: growth is back! The euro area economy is expanding at a rate not seen since before the financial crisis. Unemployment and deficits continue to fall and investment is at last rising in a meaningful way.

Economic growth is also more balanced than it was a decade ago and provided we pursue smart structural reforms and responsible fiscal policies, it can also be more durable.

Politically, the populists lost the biggest battle of 2017: the French elections, which saw Marine Le Pen resoundingly defeated. But in Germany, the AfD has become the first far right party to enter the Bundestag since the 1950s and in Austria, the Freedom Party holds key positions in the coalition government. Hard-right populism is alive and well in central and eastern Europe. And of course, we are all watching closely the upcoming elections in Italy. Populist parties thrive on the economic insecurity that is the lasting legacy of the crisis, and on the divergences that remain far too pronounced in the eurozone. That's why we need to focus all our efforts on tackling inequalities, and ensuring that the current strong economic growth also benefits the most marginalised communities.

The strong economy and the geopolitical backdrop with the UK set to leave and a more inward-looking US together have created a unique window of opportunity to deepen the Economic and Monetary Union. This window will not remain open for long. We need to take ambitious decisions to build a stronger, fairer euro area and we need to take them in the coming months!

Regarding Greece: How would you describe the next, which is the last, six-month period in terms of the implementation of the Greek memorandum?

The next six months constitute the home stretch of the memorandum era, which began almost eight years ago in the spring of 2010.  We all know how difficult these years have been for the Greek people. Now, the light can be clearly seen at the end of the tunnel. The swift, smooth and successful conclusion of the third review bodes well for the next steps. Thereafter there is just one, final review left to complete before the programme concludes in the summer. There is every reason to hope and expect that the final review will go equally smoothly, provided the good constructive spirit that has defined the cooperation over recent months is maintained by all partners.

It is also time to have a debate about Greece's towering debt based on new proposals, such as the French one. What is your approach?

The fact that Greece's public debt stands at almost 180% of GDP remains a problem that must be addressed decisively. My approach, and the Commission's approach, is to support the discussions underway with one goal to facilitate an agreement on a credible process to ensure that Greece's debt is sustainable. Technical work is now underway on a mechanism for debt relief tied to economic growth, an idea that was first proposed last year and supported by the June 2017 Eurogroup statement.

Looking back over the last years, what would you say about your cooperation with the Greek government?

I have worked very well with Alexis Tsipras and Euclid Tsakalotos these past years. The open lines of communication we have had have been crucial in helping to move the process forward when we have hit one of the many obstacles that were scattered along the path. And we have always succeeded in overcoming those obstacles, together. Trust is critical in such situations, and they know that they can trust me and the European Commission to speak frankly to them and to do all in our power to help Greece to get back on its own two feet.

What comes after the memorandum? Greek Prime Minister Alexis Tsipras and Finance Minister Euclid Tsakalotos are already talking about a Greek programme of reforms, growth and social policy. What is your prediction about the situation in Greece and its prospects after August?

What I want is that after the programme, Greece will become, in economic terms, a normal European country once again. Greece?s economic policies will be monitored through the coordination process we call the European Semester. Because many of the programme commitments will continue to be implemented long after the programme ends, there will also need to be an appropriate type of post-programme surveillance in place. But lets be clear: there will be no more memoranda and, provided responsible fiscal policies are pursued in the future, there will be no more need for austerity.

Concluding, we would like to ask you to send your own message to the Greek people, through the national news agency.

Greece has come a long way since the dramatic days of spring 2010, and since the turbulent summer of 2015. Now it is time for a final effort to conclude the programme successfully, and to look to a calmer, brighter future as a resolutely normal member of the euro area! You can always count on my support. 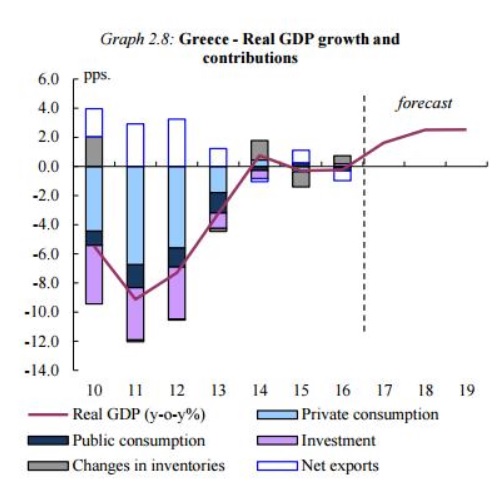