Of Greece and Ireland: An enduring friendship 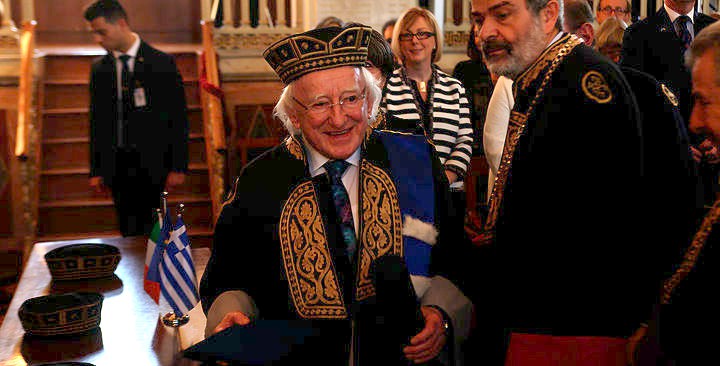 The President of Ireland, Michael D. Higgins, was conferred with an Honorary Doctorate Degree by the Department of English Language and Literature of the School of Philosophy at the National and Kapodistrian University of Athens. President Higgins undertook a three-day visit to Greece, following an invitation by the President of the Hellenic Republic, Prokopios Pavlopoulos, who received him on February 22. On the same day he also met with the Greek Prime Minister Alexis Tsipras, the Leader of the Opposition, Kyriakos Mitsotakis, and the Mayor of Athens Yiorgos Kaminis. On February 23, Higgins was awarded the Honorary Degree at a ceremony attended by the Greek President; on this occasion, he gave a lecture on the ancient and enduring relationship between Ireland and Greece and their shared future.

Beginning his speech, President Higgins reflected on the rich history the two nations share, starting at the ancient times, when Greek explorer Pytheas of Massalia recorded the first encounter between the Hellenic and Irish worlds and Ireland’s landscape was first described by a Greek geographer, Claudius Ptolemy, whose maps were likely used later by the greatest Irish navigator, Saint Brendan. As he put, both nations share “the sea, the importance of the interpretation and symbolism of a journey, migration, island life, land, possession and dispossession”, while navigation and exploration have been “at the centre of our experience as migratory peoples”.

Higgins commemorated John Scotus Eriugena, translator of the work of Dionysius the Areopagite, patron saint of Athens, who upheld the Greek tradition of bold philosophical speculation in the 9th Century Carolingian Court, as well as Robert Wood, an Irish scholar who first proposed that Homer’s was an oral rather than a literary voice. As he said, James Joyce, one of Ireland’s most iconic authors, could never have existed without Homer and Aristotle, as evidenced in his opus magnum, Ulysses. He also spoke of a feature of rural Ireland unparalleled elsewhere in Europe: the informal “hedge schools”, where Greek and Latin, and the foundation myths of both were taught, back in the 19th century.

President Higgins also referred to the two countries’ history of migration: Both have been major source-countries for migrants in the recent past – “to the point where for each of us, our sense of self must draw on the experience of our diaspora”, as he put it – while now they have found themselves in the position of trying to offer protection and relief to the many displaced by conflict. In this regard, he exalted the two countries’ hard efforts, stating that “the hospitality shown by Greece to today’s victims of war, expulsion, dispossession and nationalism is by any measure extraordinary”. 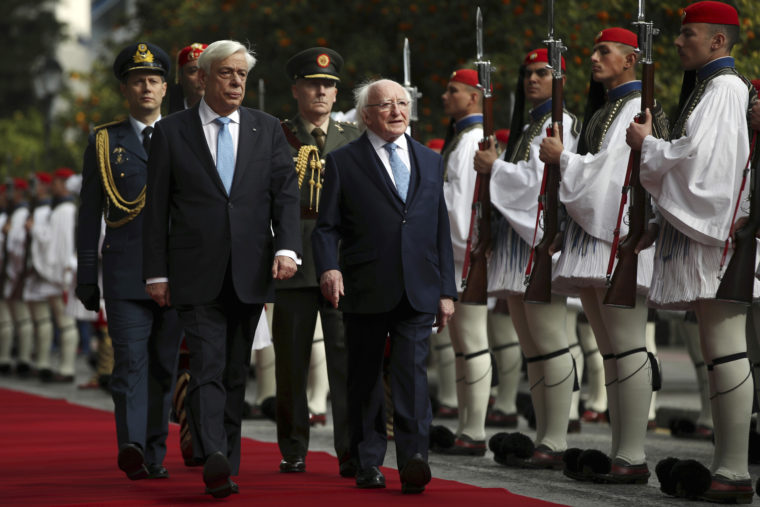 As he also noted, Ireland and Greece have been partners in peacekeeping, have worked together on the UN Human Rights Council and each has served with distinction on the UN Security Council. “Ireland and Greece, because of such multilateral commitments are so well equipped to play a disproportionate role – this time in Europe, but also well-equipped because of so many other factors. One is our journey to independence, each conscious of a distinct cultural identity and a cultural influence disproportionate to our size, yet each dominated into the near historical period by a major power. In short, we each know something of the process involved in achieving sovereignty and attempting to use it in a new way.”

In relation to the future of the European Union, Higgins stressed the need “to make a new moment for political economy [...], to unmask the ideologically-driven suggestion that there are no alternatives to the present model of economic thought and its assumptions that markets, not the State, should define citizen’s welfare, security or life chances. […]Accompanying this economic challenge of a change of theory and the policy it produces, is a political challenge – the need to consider the political underpinning of Europe. The future of Europe cannot be a limited conversation between the strongest”.

Higgins also placed an emphasis on two areas where progress can quickly be made with significant and immediate benefits for the EU: the role that culture can play in both shaping and securing the Europe of the future, through programmes encouraging the greater circulation of academic and artistic work around Europe, and the role of young people, via programmes such as Erasmus. Closing his speech, Higgins expressed his belief that the peoples of Europe need an “appropriate shared language, of ideals and practice”, in order to ensure a viable common future.

Read the entire transcipt of the lecture