Dimitrios Papadimoulis: Europe for the many, not the few 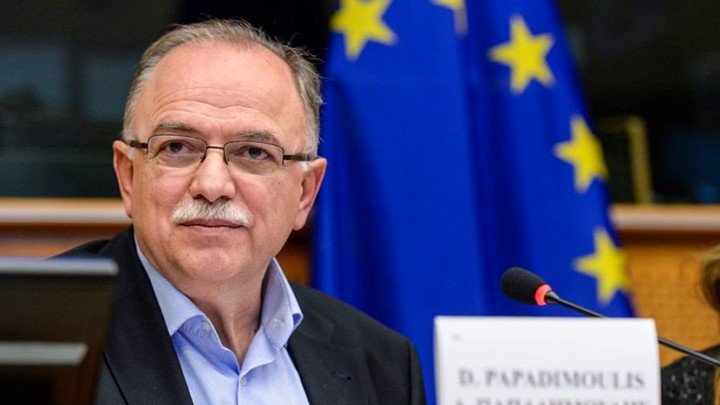 Papadimoulis stressed that the European project needs to implement reforms that "will increase democratic legitimacy of institutions like the Eurogroup, enhance citizen’s participation in decision and policy-making, strengthen tax evasion regulatory mechanisms, and empower social rights, gender equality, and social justice". Papadimoulis added that "European citizens want a big change in the European establishment as they feel deeply disappointed by the political leaders and the way decisions are taken behind closed doors" and he refered to the “Progressive Caucus”, an alliance of the political groups of the Left, the Socialists and the Greens in the EU Parliament that  work together to build on an alternative scenario for Europe.

On Greece, the Vice-President of the EU Parliament noted that "many positive developments have taken place since Syriza government came in power" as "along with  the fiscal consolidation program, the government has adopted many progressive reforms in the health sector, education, public administration, tax evasion and social issues, like the same-sex marriage or the legal gender recognition for instance." Papadimoulis also talked about the broad strategic and growth plan prepared by the goverment for the 2019-2023 period, which aims at "strengthening the economy’s export-led capacity, securing sustainable growth, efficiently managing the long-standing consequences of public deficits and debt caused by decades of mismanagement and corruption scandals" while "supporting all these social groups that had to deal with tremendous pressures during the austerity era."

Below you can read the main points of the speech in English, as taken from the April 2018 Newsletter of the Press Office of the Greek Embassy in London:

“The evolution of the European community since 1945 has been an integral part of the reconfirmation of the nation-state as an organizational concept. Without the integration process, the nation-state could not have offered to its citizens the same measure of security and prosperity which it has provided in the past”.

It´s not me, it´s the academic Alan Milward that said those words 25 years ago. And it is certainly an interesting approach.

Milward´s argument was that, the decision to found the European Economic Community 60 years ago, was not driven exclusively by a moral or ideological sentiment believing that this is the right thing to do. According to him, this was more a strategic decision, based on the experience of the two world wars and the risk of the seeing the nation-state to collapse, by not being able to cover the needs of its own citizens.

Instead, the decision to build a European Community was a way to rebuild the individual countries that had suffered. It was a way to provide the European population with what the nation-state couldn´t sufficiently do, which is to give a sense of security, cooperation and prosperity to the people.

Since then, European Union was the main driving force, that even though it took certain powers from nation-states, it helped them survive the new post-war era and provide its citizens with human rights, peace and stability.

But let me say that European Union wasn´t only a post-war concept that based on a cost-benefit analysis in order to save the nation-state. It was also an idea of very visionary personalities, such as Altiero Spinelli. Spinelli, while being jailed by the Mussolini regime on the small italian island called Ventotene, wrote together with Ernesto Rossi, the famous Ventotene Manifesto.

It was a Manifesto that meant to play a crucial role in conceptualising a united, peaceful and democratic Europe. Τhe Manifesto called for a new political system that would be able to replace nationalistic antagonism with international cooperation, based on mutual institutional and economic relations.

This is how the European Vision started. As a necessity but also as an idea.

But how this old story, reflects today´s situation?

It is true that we are going through a tough period in Europe and we are facing some of the most crucial challenges in EU and national scale.

Three of the most important challenges have to do with the institutional reform of EU and Eurozone, the ongoing negotiations for Brexit, and the efforts of the Greek Government to put an end to the devastating and lasting austerity politics and memoranda. 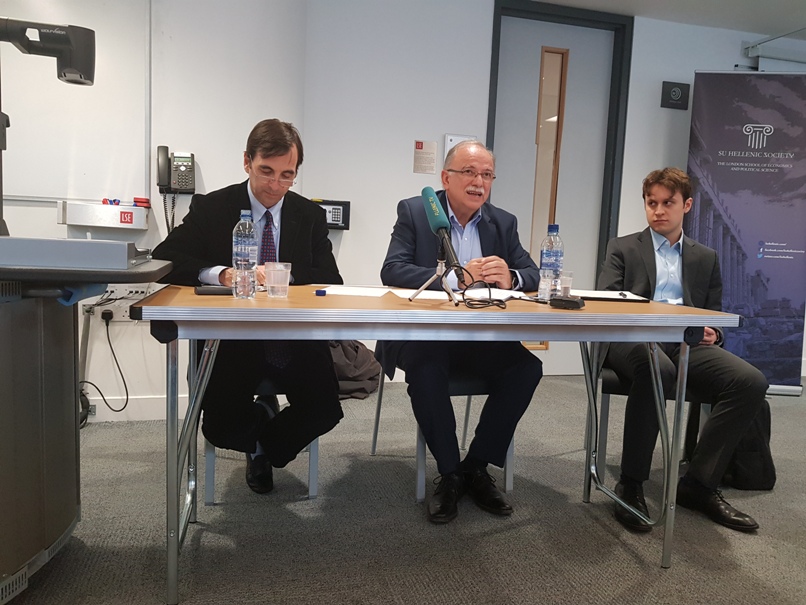 Beginning from the EU and Eurozone, it is vital to underline that the European project as it has been developed during the last ten years, needs to be reformed.

In the European Parliament we have established a group of progressive MEPs from the political groups of the Left, the Socialists and the Greens, called the “Progressive Caucus”, and we are jointly work to build on an alternative scenario for Europe.

Our major pillars concern all above issues with the role of civil society and NGOs to be crucial in the making of our agenda.

We call for an alternative scenario for Europe and a different model of governance that overcomes the limits of the current model.

It takes time and big efforts to put this process on track, but it is important that such proposals and initiatives are coming into the public debate, especially in a period where we witness the increase of far-right parties and hate speech enters the public sphere.

The European citizens want a big change in the European establishment as they feel deeply disappointed by the political leaders and the way decisions are taken behind closed doors.

It has been quite a lot of years that EU leaders discuss more on technical details than on broader ideas on how to implement reforms and improve the living standards of the citizens.

This problem on EU policy-making has severely damaged the trust of the citizens towards the political leaders and weakened the European project altogether.

To that end, the role of Left and progressive forces is and has to be fundamental.

We need to stop making promises and saying to big words. It is necessary to elaborate a concrete plan that can provide specific solutions to the challenges we need to address and the problems we need to solve.

Otherwise we will keep witnessing populist parties growing across EU, undermining democracy and the major political values upon which the European project was built, back in the 1950s.

Going now to Greece, my birthplace, many positive developments have taken place since Syriza government came in power.

After almost seven years of financial instability and downfall, the economy is heating up its engines and recovers. Unemployment is steadily falling. Exports rate is increasing. Social safety nets are strengthened. Investments are going up, and the country is one step before exiting memoranda in August 2018.

Along with the fiscal consolidation program, the government has adopted many progressive reforms in the health sector, education, public administration, tax evasion and social issues, like the same-sex marriage or the legal gender recognition for instance.

At the same time, the Greek government is elaborating a broad strategic and growth plan for the period 2019-2023.

This program also refers to collective demands and reinstates all these social groups that have been tremendously suppressed during the austerity era.

This plan includes as major elements the strengthening of the economy’s export-led capacity, securing sustainable growth, efficiently managing the long-standing consequences of public deficits and debt caused by decades of mismanagement and corruption scandals of the previous governments of ND and PASOK parties.

At the same time, this plan is putting an end to austerity and strengthening social policies.

After August 2018, and as all parts involved in the bailout program underline (i.e. Commission, ESM, ECB), Greece will become, in economic terms, a normal European country once again.

Greece’s economic policies will be monitored through the coordination process that applies to all member-states with similar programs, like Portugal, ireland and Cyprus.

There will be no more memoranda. The Greek government will have more freedom and the means to implement a mostly self-designed program, following at the same time the fiscal targets that have been agreed.

Greece is entering into a new phase and can shape a better future. This is the big challenge for Syriza against all these political forces that have led the country to such a catastrophic social and financial state.

So, today from London, I need to emphasize on the following one: We have to turn brain-drain into brain-gain.

The younger generation that has left Greece to seek work elsewhere has to start elaborating the idea to come back to their homeland and help us shape together our own future.

Brain-drain has to be tackled and I am sure we can make it happen and create these conditions that could make Greece turn the page and invest in a strong post-bailout era.

As of UK, although being a demanding process, Brexit has stirred a growing debate in the EU and the policies that have led to this development.

Broadly speaking, as EU, we have not thoroughly discussed about the roots and causes of Brexit. Is this a British issue or a European one? Should we blame the politicians or the people for this choice?

To be honest with you, I believe that we, as EU policy-makers, we have not heard the concerns of the British people, and generally of the European people.

And Brexit is a consequence of our short-sighted approach and the fact that we have not entered into a serious debate about What Europe We Want.

Britain is the fifth (5th) richest country in the world. But that means little when many people do not share in that wealth. Many feel the system is rigged against them. And this also the case for Europe as well.

What Brexit has taught is that we need an economy that works for all, institutions that work for all, policy-makers that serve collective demands.

We cannot measure our economic success by the number of billionaires nor by the amounts of money sent to tax heavens, but by the ability of our people to live in decency and improve their living standards.

As progressive politicians - and if we want to call ourselves like that - we need to upgrade our economies, break down the barriers that hold too many of us back, tackle the gender pay gap and improve social justice.

For years the European and British leadership has put first the gains and interests of small, vested groups against the interests of the many.

We have reached a point where we need to choose between two different political and ideological models: from one side, the neoliberal and conservatism politics that work for the few, and from the other side the progressive and left-wing forces that work for the many.

It is as simple as that. We are at crossroads and there are no longer mild choices left. Either we stand with the many, either with the few.

Thank you again all for being here this evening.

The European Debate is vivid and vibrant. I am sure that you - as students and young researchers - will contribute to this debate!"