This Monday 29/10, prime minister and leader of SYRIZA Alexis Tsipras addressed a letter to the leaders of the political parties in Parliament, ahead of the government initiative for revising the Constitution.

In his letter, the prime minister notes that the eight years of fiscal adjustment programmes did not only erode a part of Greece's financial sovereignty but also undermined the value of representative institutions and political bodies, undermining the citizens' trust in the political system and even in democracy itself. He further posits that now, after the clean exit from the memoranda and the agreement on Greek debt, it is the right time for political parties to consider “what must change for our political system to regain the citizens' confidence: the foremost initiative in this direction is to revise the Constitution": boosting institutions of democratic participation, disctinct roles for state and church, institutional shielding against corruption, along with the protection of common goods, are "demands that are mature in the citizens' consciousness and therefore can constitute the start of a series of broader political and social consensus", according to Tsipras.

Last week, during a meeting of SYRIZA's Political Secretariat, Alexis Tsipras had chacterised the revision of the Constitution as "a historic opportunity for progressive forces", adding that "we want a democratic, progressive constutional revision. We want to strengthen popular sovereignty as the foundation of government. We want our proposal to stop the elitist, neo-liberal or technocratic devaluation of politics".

Michalis Spourdalakis, professor of Political Science and Chairman of the Dialogue Committee on the Constitutional Revision, said in an interview with Radio Stadion Athens 98,4 that once parliamentary discussion begins, he is “cautiously optimistic that that consensus can be achieved". He added that he would like to see how the “KKE, KINAL and Potami will respond to these proposals, which are almost common ground after the experience of the last 7 - 8 years”.

The government’s proposal, first presented in July 2016 has been enriched by the results of the public consultation with citizens and the independent agencies, was concluded under the coordination of the Dialogue Committee on Constitutional Revision. The proposal is based on five pillars:

The first pillar aims to deepen democracy and strengthen parliamentarianism with a set of interrelated reforms such as:

The second is the establishment of institutions of direct democracy, with the aim of deepening democracy and encouraging people's participation in the political life of the country (referendums, popular legislative initiative).

The third pillar seeks to strengthen the rule of law (reform of parliamentary immunity, abolition of the Ministers' Liability Act, change of the method of establishment of independent regulatory agencies).

The fourth pillar concerns state-church relations, so that distinct roles can be established with broad consensus by a series of proposals such as:

Finally, the fifth pillar concerns the safeguarding of social and collective rights and common goods. Water and electricity are to be recognized as social goods and sure collective bargaining for wage determination and the right to unilaterally apply to arbitration are to be constitutionally ensured. 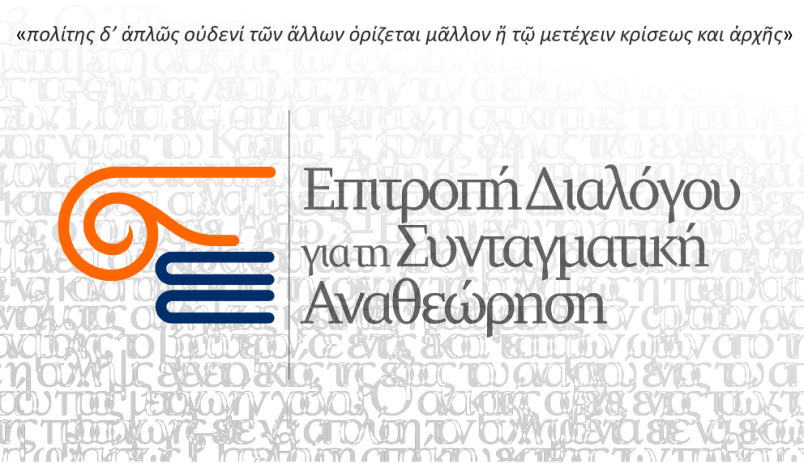