PM Alexis Tsipras in Ankara: We must build a relationship of mutual respect 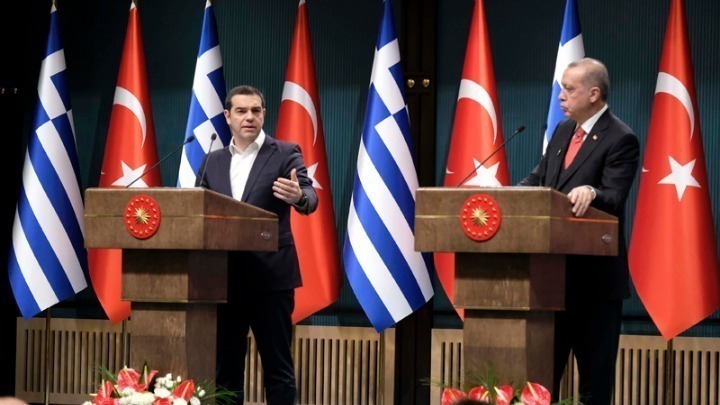 Prime Minister Alexis Tsipras arrived in Turkey this Tuesday, 5.02 for a two-day visit that aims to reduce tension and promote mutual trust between the two countries. The visit follows a groundbreaking visit by Turkish President Recep Tayyip Erdogan to Greece in December 2017, the first of its kind in 65 years.

“We must build a relationship of mutual respect, based on international law, to the benefit of our peoples” the Greek Prime Minister said, during a joint press conference with the Turkish President following an earlier meeting between the two leaders (5.02).

Referring to his relationship with President Erdogan, Alexis Tsipras said that it is based on “respect, honesty, directness and on a constant effort to build the relations that Greece and Turkey ought to have in the 21st century; relations that correspond to the history of our peoples.”

Tsipras also referred to the more strenuous points of Greek-Turkish relations, such as the frequent violations of the Greek national airspace by Turkish aircrafts, the case of the eight Turkish officers who requested asylum in Greece following a coup in Turkey, and the two Greek officers who were arrested crossing the borders and released after over five months in custody in Turkey.

“Nevertheless, he added, during my visit I believe we will have the chance to continue the difficult, but frank dialogue we started in December 2017 and to pick up our positive agenda from where we left it. Greece is opening a new historic chapter in 2019, leaving behind fiscal adjustment programs and the crisis, returning to growth and the international markets, deepening human rights, resolving problems with its neighbours like North Macedonia or Albania and becoming a pillar of peace and stability in the region, through new formats of cooperation in the Balkans and the Eastern Mediterranean. The conditions must be created, also in Greek-Turkish relations, for historic steps to be taken. We must build a relationship of mutual respect, based on international law, to the benefit of our peoples, but also the broader region”.

Concerning the case of the eight Turkish officers, Tsipras reiterated that Greek judges made specific decisions that the Greek state is obliged to respect. He added that Greece does not welcome people involved in coups, noting that he was one of the first leaders to call Erdogan following the coup d' etat attempt in July 2016 to express Greece’s support.

Referring to the Cyprus issue, Greek PM commented that “we must consistently work for a fair and viable solution of the Cyprus issue on the basis of decisions of the UN Security Council, since the reunification of the island on this basis is the only possible solution. A solution that will allow a federal Republic of Cyprus to be a normal state in the EU and to function to the benefit of the people of Cyprus as a whole, Greek-Cypriots and Turkish-Cypriots”.

Furthermore, Tsipras expressed the desire that the utilization of energy sources will provide a bridge for cooperation, rather than becoming an obstacle in the region, adding that the two leaders agreed to work towards establishing a sea route connection between Izmir (Smyrna) and Thessaloniki by this summer.

Tsipras also noted that Greece cooperates at a very high level with Turkey on the basis of the EU-Turkey Statement, whose application should be intensified, because the Greek islands have been overburdened in the last years. Turkey, itself he added, “has taken over the great burden of hosting 4 million refugees. That should always be recognized by the international community and the EU should do all it can to support our neighbor”.

Referring to the asylum procedures the Greek Prime Minister stressed that “Greece has one of the fastest procedures, but we are working hard so that these procedures, that respect international law, become even more effective to the benefit of asylum-seekers and the local communities in Greece. The EU, from its part, has to find a way to strengthen its support to the countries most affected by the flows and to reject agendas that are not compatible with European law or humanitarian principles”.

Questioned about the religious freedoms of the Muslim minority, Greek Prime Minister  asnwered that “the Treaty of Lausanne is the applicable international conventional regime regarding minorities. From that point on, the promotion of reforms on the rights of the Muslim minority constitutes a commitment of the Greek Government to its citizens and not a bilateral matter with Turkey. In this framework, we have made important steps on the implementation of Sharia law, the structure and function of the Mufti offices and education issues. We will continue in this direction”

During his visit in Turkey, Greek Prime Minister visited the Ecumenical Patriarchate’s Halki Theological Seminary, which was shut down in 1971. Greek PM expressed the hope that his next visit would be made together with Turkish President Recep Tayyip Erdogan and Ecumenical Patriarch Bartholomew, in order to announce the re-opening of the island's historic Orthodox seminary.