The Secretariat General for Public Diplomacy, Religious and Consular Affairs of the Greek Ministry of Foreign Affairs recently inaugurated a series of in-service seminars, with the first, “Public Diplomacy in Practice”, taking place in Athens on February 19, 2020. The aim of the seminar was to gather officials from the Ministry of Foreign Affairs, as well as from other Departments of Government and public organizations, to discuss extrovert activity and familiarize with Public Diplomacy new trends and methods, so as to promote Greece to a wider international public.

The seminar was addressed by the Secretary General for Public Diplomacy, Religious and Consular Affairs, Konstantinos Alexandris who underlined the need for Greece, following a long period of introversion, to regain foothold and promote the nation’s narrative in a systematic, coordinated and targeted way. Public diplomacy (hereafter: PD) is about understanding, informing and engaging citizens, all of which play a role in influencing public opinion in foreign countries; it is a government to people activity, thus, a significant “soft power” tool that can be used in order to promote the country abroad more effectively. Mr Alexandris also made special reference to the recent integration of the Press Counselors and Secretaries sector into the Ministry of Foreign Affairs structure, a reform capable of making a decisive contribution to promoting Greece abroad with one voice, something that was not obvious in the past years. 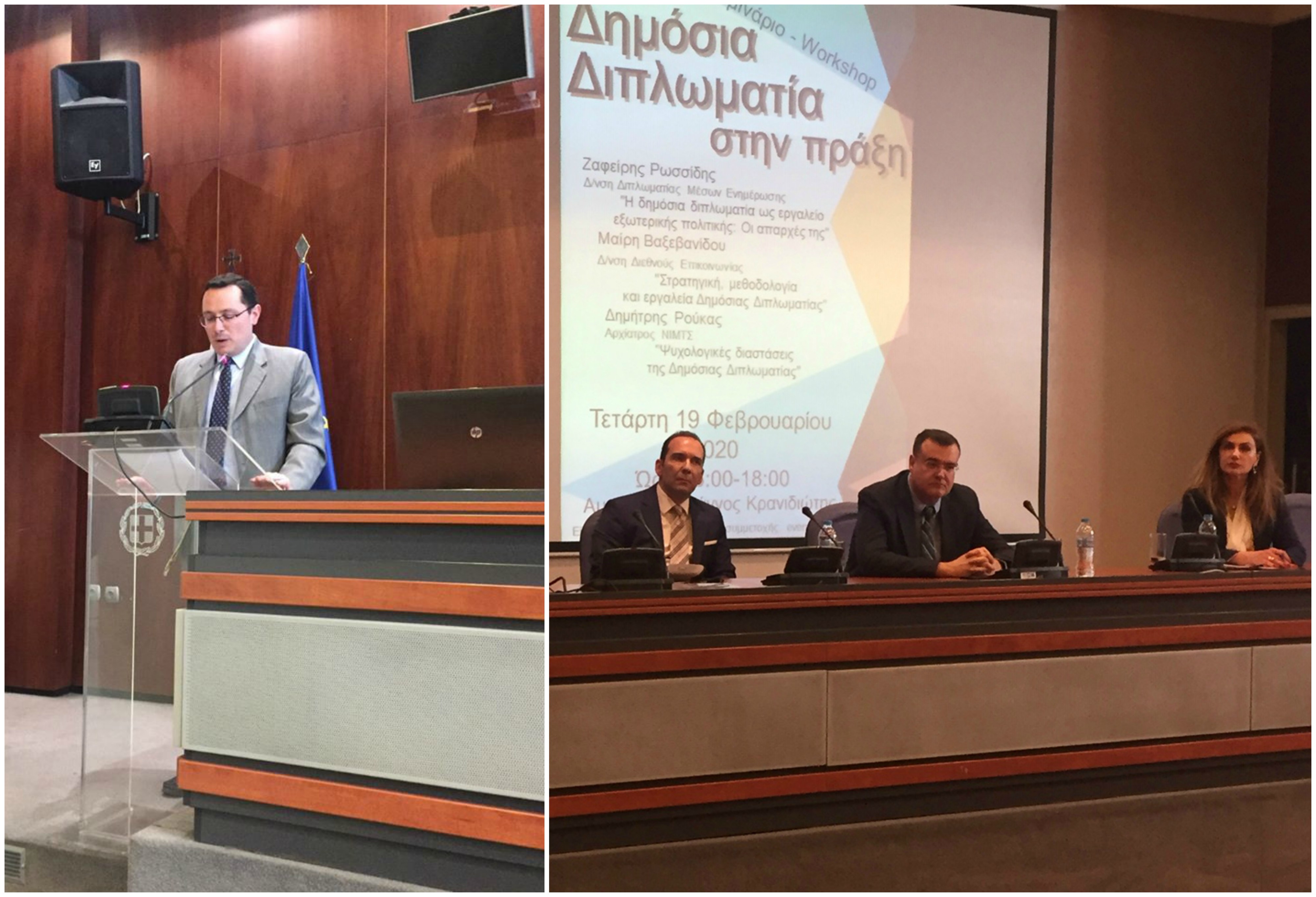 The seminar's program featured presentations by the following speakers:

Mr Rossides’ presentation, titled “The origins of Public Diplomacy as a foreign policy tool” referred to PD as a new way of approaching foreign policy with Information acting as a “strategic equalizer” that can be transformed into a comparative advantage if managed wisely. Practically speaking, it involves the promotion of a positive image for one’s country abroad and building long-term relationships, not only through activities that address official actors, but mainly non-official ones, such as foreign citizens and non-governmental organizations, which –in combination with transparency and interactive communication– is what differentiates PD from traditional diplomacy.

Overall, PD is about communicating, on a government to people basis, a country’s ideas and ideals, its institutions and culture, as well as its national aspirations and current policies, aiming to influence attitudes or opinions of publics abroad, Mr Rossides underlined, before going on to give a brief historical background. More specifically, he noted that PD has its roots in the World War II period when the USA decided to launch an “ideological war” by creating the Office of Wartime Information (OWI) and the Voice of America with the aim to inform and have a cultural influence on a global scale. In the 1950’s, after the war was over, the staff and activities formerly carried out by OWI were transferred to the newly established agency “United States Information Agency (USIA), known overseas as the United States Information Service (USIS) aiming, among others, to diminish the influence of the Soviet Union in the Western World. For instance, examples of US PD in practice were commercial and cultural interchange programs such as the Fulbright Program. In 1999, the USIA’s staff and responsibilities were integrated into the Public Diplomacy Division of the State Department, concluded Mr Rossidis, who also referred to the case of Greek PD until the moment of its recent integration into the MFA, as well as its goals for the near future. 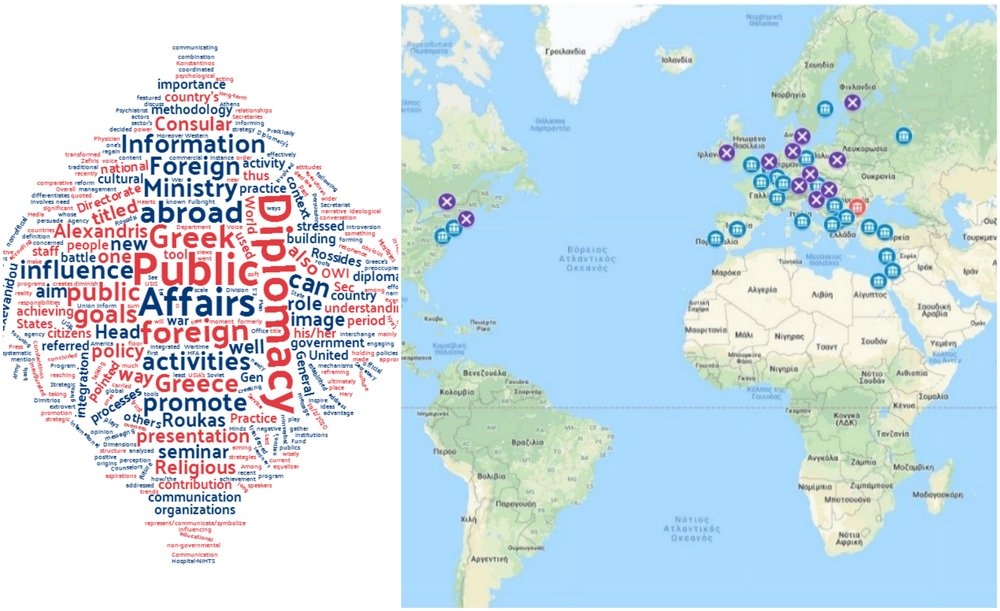 The floor was then given to Ms Vaxevanidou, whose presentation was titled “Public Diplomacy strategy, methodology and tools”. Ms Vaxevanidou opened her speech by analyzing the steps necessary in order to implement a strategic plan, pointing out –among others– the significance of having a mission statement, as it helps an organization define its purpose in the now and communicate it to its publics; that is why it has to be concise, clear and able to articulate what’s unique about the organization in order to build trust and rapport with an audience. Concerning strategic planning, Ms Vaxevanidou stressed the importance of situational analysis by using tools such as the SWOT analysis, which aims to identify the strengths and weaknesses internal to the organization and the opportunities and threats presented by the external environment; another tool that can be used is the PESTEL analysis, according to which each Greek Mission abroad and/or Public Diplomacy Office must conduct an external environment analysis on all levels: political (P), economic (E), social (S), technological (T), (E) environmental and (L) legal, before moving on to the next step which is to set long-term goals on what the organization intends to achieve, such as “promoting Greece as an investment place” which can then be put down to more specific and measurable objectives defining the strategies or implementation steps to attain the identified goals.

The next step is to define the action plans for all objectives. Specifically, there are four dimensions of PD that can be formed into action plans: a) awareness (international broadcast, social media), b) appreciation (visit programs, campaigns), c) affinity (exchange programs, nation branding) and d) advocacy (collaborative programs, network initiatives). Last but not least, Ms Vaxevanidou pointed out that developing a PD Strategy is a complex and difficult task which requires deep knowledge and capabilities, as one has to deal with a foreign culture’s values that underlie behavior, which constitute the internal or subconscious part of the so-called “cultural iceberg”. 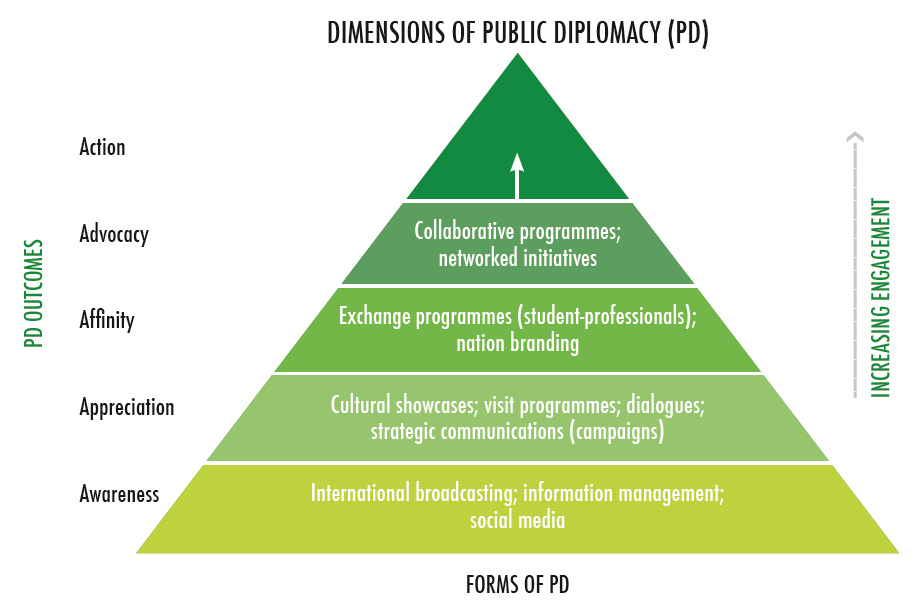 The seminar concluded with Mr Roukas’ presentation, titled “Psychological Dimensions of Public Diplomacy”, focusing on the role of psychological mechanisms and influence processes and the way they are involved in Greece’s efforts to persuade, inspire and ultimately achieve its goals through PD. Among others, he quoted Nye’s definition on PD (2005) according to which, holding a conversation with the public and achieving mutual understanding plays a pivotal role in reaching foreign policy goals.

Moreover, Mr Roukas stressed the importance of trust as it creates the context in which persuasion and influence can be used, while he also pointed out the importance of nonverbal communication for achieving messaging resonance. As far as negative message management strategies are concerned, he analyzed the processes of content and context reframing; to sum up, he referred to PD as a “battle of narratives” or a “battle for Hearts and Minds”, in which perception is reality; thus, one should not be so much preoccupied about how one will promote their activities but more about what they communicate.

See also: Sec Gen for Public Diplomacy, Religious and Consular Affairs Constantinos Alexandris on building the new image of Greece ; The practice of Greek Public Diplomacy and its contribution to the country’s image abroad