Theodore A. Couloumbis, world renowned International Relations expert, Professor Emeritus of International Relations at the University of Athens and a firm believer of Greek-Turkish dialogue, passed away last week at age 87. He was among the founders of Hellenic Foundation for European and Foreign Policy (ELIAMEP), one of the first and biggest Greek think tanks -established in 1988- and has served as the foundation's President (1993–95) and Director General (1998–2006).

As is mentioned in this obituary at ELIAMEP, "his contribution to ELIAMEP and to the Greek international studies community is immeasurable. He was a teacher, friend and mentor to hundreds of his university students and colleagues. A model academic teacher and a man of profound integrity, genuine courtesy and inexhaustible kindness, he also had an inexhaustible and sparkling sense of humour."

Theodore Couloumbis was born in Thessaloniki in June 1935. His father was an artillery officer, his mother a kindergarten teacher. He lost his father in 1941, when he was killed aged just 33 in the Battle of Crete. He grew up with his mother and brother and attended Athens College on a scholarship. He emigrated to the United States to study in 1952; he would live, study and work there for more than 30 years. He earned a BA in Political Science (1956) and an MA in International Relations (1958), both from the University of Connecticut, and a PhD in International Relations from the American University (1963). In the years 1965-83, Couloumbis was professor of International Relations at the American University’s School of International Service in Washington DC where he received several awards for outstanding teaching.

As he writes in his book “71…74: An academic’s notes“, the desire to return to Greece was always there in his mind and  in his heart especially, but the military coup of 1967 made this impossible, as he could not work under such suffocating conditions and constant censorship. So he stayed in America and fought the dictatorship from there. Testifying to Congress in July, August and September 1971, he strove to get “a simple but important message” across: “Stop supporting the Colonels! Greece is a country that can offer a genuinely democratic as well as non-communist alternative to the Colonels’ obscurantist and despotic regime”.

He eventually returned to Greece and from 1983 to 1989 he was professor of International Relations at the School of Law of the University of Thessaloniki, moving to the University of Athens early in 1990. In 1995-1996 he was a Senior Fellow with the United States Institute of Peace and in 2006-2007 a Policy Scholar with the Woodrow Wilson International Center for Scholars. He served as President of ELIAMEP in Athens (1993-1995), President of the Institute for Balkan Studies in Thessaloniki (1988-1990) and President of the Hellenic Society for International Law and International Relations (1985-1987). Couloumbis also attended meetings, as an expert, at the Greek Foreign Ministry’s Foreign Policy National Council, from its founding in 2003 to 2006. He was also a member of the Greek Turkish Forum, is a one-and-a-half-track diplomacy initiative, founded in late 1997 with the aim to promote dialogue and communication between Greece and Turkey.

Coloumbis’ work focused on conflict resolution in the post-Cold War international setting and on aspects of Greek foreign policy. He is the co-author (with James H. Wolfe) of the well-known text book, International Relations: Power and Justice, Prentice Hall, 4th ed. 1990, author of US, Greece and Turkey: The Troubled Triangle (Praeger,1983) and co-editor of the new Journal of Southeast European and Black Sea Studies (Frank Cass and ELIAMEP). His more recent publications include the Greek Junta Phenomenon (Pella, 2004) and a co-edited volume, Greece in the 20th Century (Frank Cass, 2005). In addition to his scholarly output, he was a regular columnist and frequent contributor to newspaper “Kathimerini”.

His primary research interests included dispute resolution in the international environment, and he worked to bring about a rapprochement between Greece and Turkey based on mutual understanding within the framework provided by international law. He fought all his life for the settlement of international crises. He was a great teacher who filled lecture theatres with his infectious passion. A profoundly modest man, he did not accept positions of power when they were offered to him, always preferring to contribute quietly.

*With information from: Kathimerini, ELIAMEP 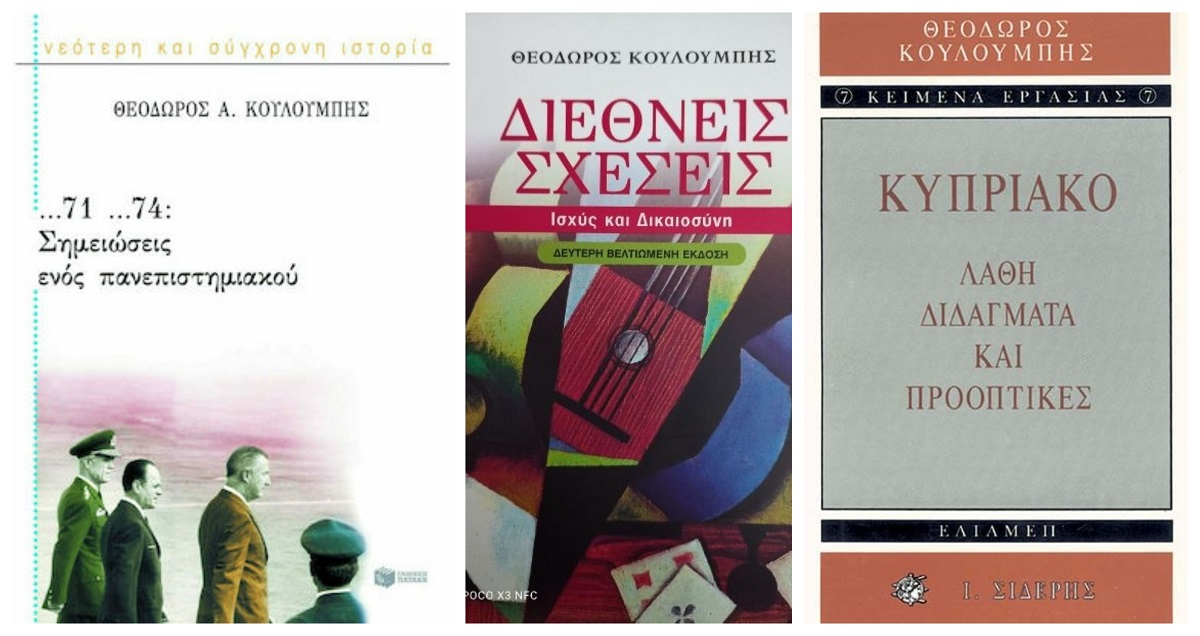