Dimitra Trypani on "The silent one", her experimental music theatre work 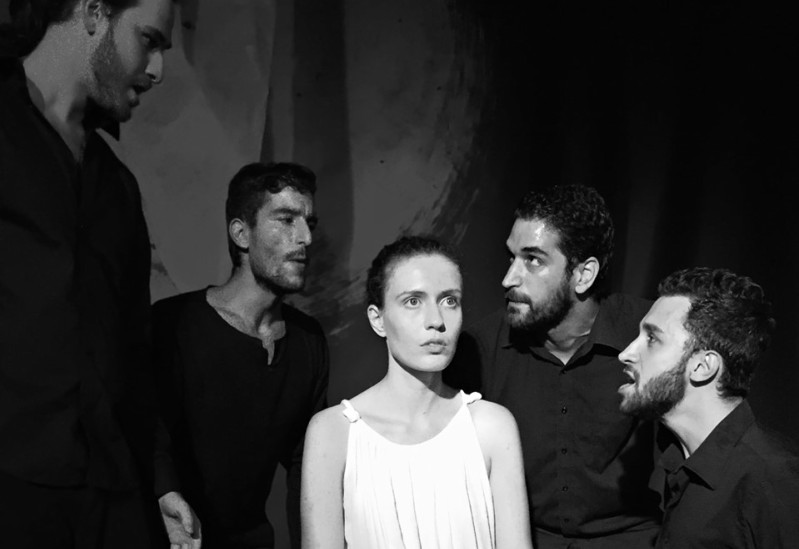 An old "honour" crime inspired Greek composer Dimitra Trypani to create The silent one, a work of experimental music theatre intended as an "alternative requiem", a contemporary choral ode. The play, which premiered at the Paxos Music Festival on 9 September 2019, will be presented at the Alternative Stage of the Greek National Opera on 11-13 October 2019.

The silent one – a contemporary khorikòn is based on actual events that took place around 1850 in a poor Greek village: a young woman, Milia, was murdered by her father and brothers for having "shamed her family" when, on her wedding night, she is discovered not to be a virgin. The story unfolds in an atemporal setting, a Dantean limbo inhabited by forgotten souls. By assuming responsibility for their horrid act, the characters find their way to atonement and redemption.

In this work, Trypani perfects the compositional tool she has been developing for twelve years, which has become a characteristic element of her aesthetic: the almost absolute elimination of "seams" between text and music, through the integration of the text into the music score. The poetic text was written by acclaimed writer, poet and journalist Pantelis Boukalas. The silent one is a co-production with the Paxos Music Festival, with the support of the J. F. Costopoulos Foundation and the Hildegard Behrens Foundation. Performances will feature English surtitles.

Dimitra Trypani studied composition at the University of Edinburgh with Nigel Osborne and Greek literature at the Aristotle University of Thessaloniki.  As a composer, she focuses on the creation of interdisciplinary music performances, using strictly structured polyrhythmic and heterophonic patterns both in music and speech. She has collaborated with acclaimed orchestras, chamber ensembles and soloists. Works of hers have been performed in many countries (including the UK, Germany and the USA) at several important venues. 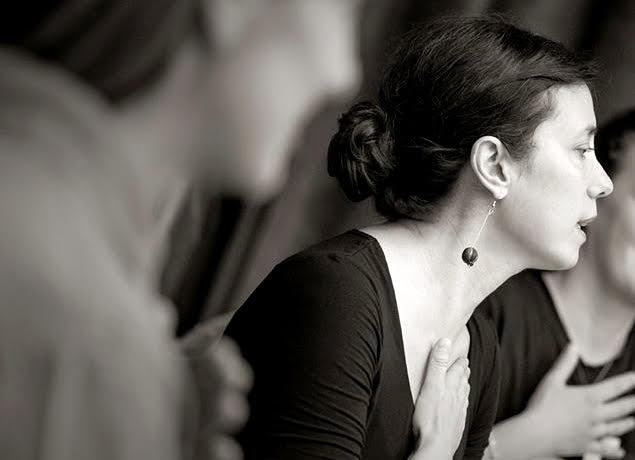 She is the founder and main composer of the NQR Ensemble, an experimental music group based in Athens, while for the past seven years she has been Composer in Residence at the Paxos Music Festival. She has taught composition, ear training and interdisciplinary music practices in various universities in Greece and the UK. She is currently working as an assistant professor at the Department of Music Studies of the Ionian University, Greece. Greek News Agenda interviewed* Dimitra Trypani on the occasion of the presentation her work at the Greek National Opera.

You have been Composer in Residence at the Paxos Music Festival for the past seven years. How did this collaboration begin?

The collaboration with the Paxos Festival began in 2013 while I was Lecturer at the University of Cumbria in England. I received a proposal then from a former colleague of mine from the Ionian University – Petros Andriotis – who was involved with the Paxos Festival, to run a children’s workshop on the island of Paxos on account of my prior involvement with music educational projects. Being away from Greece for the second time in that period of my life and having heard how beautiful the island was, I immediately agreed. So, my first collaboration with the Festival was not as a composer in residence but as a workshop conductor. Because of the success of that first project, we decided with Faye Lychnou – the "soul" of the Paxos Festival – that our project for the following year would be an original music theatre work for a children’s choir which was performed in 2014 by the Paxiot children of the workshop. With that work, my collaboration as a composer in residence with the Paxos festival officially started and so far it has produced seven very successful contemporary music theatre works, with the participation of prominent Greek classical musicians, which have been performed both in Paxos and in Athens, and also various other festivals around Greece.

What is it that drew you to the story of The silent one? Was it your own initiative or did someone propose the subject to you?

The story of The silent one is based on a real story that belongs to my family from my father’s side. It happened, as far as I can gather, about four to five generations ago, thus circa 1850s. I used to listen to this story from my parents while I was growing up, who also used to hear it from my grandmother, so in a way, this story – unfortunately very grim and very true – came to me in the form of a legend. I always knew that I would tell this story to people at some point in my life, but I did not know when and how. So finally this time has come to share and communicate, through The silent one, the many levels of its reading.

What was your creative process? Was Pantelis Boukalas’ libretto based on music you had already composed?

The creative process for The silent one began for me two to three years ago with a lengthy research on ritual lament in Greek folk tradition and especially Maniot lament – where the story comes from. Anthropologist Christos Varvantakis helped me with his PhD research on the lamenting rituals in Inner Mani. With Pantelis Boukalas, we spent four very productive months from September till December 2018 researching, discussing, exchanging notes, thoughts, material etc. in order for Pantelis to understand the background of the story and its surrounding environment, to establish all the missing pieces in order to creatively fill them and also for us to decide together what this performance was really all about. Thus the music was written after the text was finished and after Pantelis was gracious enough to allow me to add a prologue and an epilogue that I constructed in colláge form, based on excerpts from his previous excellent book O Mantis (The Prophet). Moreover, I would not call Pantelis’ text a "libretto" as I would not call The silent one an "opera". Pantelis wrote a poem and I created a contemporary Greek khorikòn.

Why did you choose to place your story in an atemporal setting? Did you want your narration to distance itself from the specific socio-historical context of the actual crime?

First of all, you are right in the deliberate distancing of the narration from the specific time-space of the actual event of the crime, through the atemporal setting. But this is not just any atemporal setting. My idea for our characters - who bore many resemblances and shared many characteristics with characters from Greek tragedies - was that we find them in Dante’s limbo, so we do not see them but we see their souls, or even better, we sense and listen to their souls. They are still in Limbo where they have to really remember what they have done and fully reconstruct their memory of the horrible crime in order to mourn, repent and forgive themselves so that they can proceed to the state of forgetting, of cleansing their memory of all the darkness, sorrow and pain that this deed has caused them. Therefore, the atemporal setting is also a setting that denotes this other world, Dante’s world, but also any world where a woman or man cannot free themselves from the pain of a very personal loss.

The work is described in its title as a "contemporary khorikòn" – the Greek word for a Greek drama’s choral part. Were you influenced by the structure of Greek tragedy?

I was not influenced so much by the structure of the Greek tragedy as much as I was from the overall characteristics of the genre. The fact that it was a religious community ritual –as is for example a wake ­– the grief and pain sung, shouted or whispered by the heroes and shadows of Greek tragedy, the immense power of the melodic contour and the rhythm of the language, all these have contributed to The silent one’s inner core. 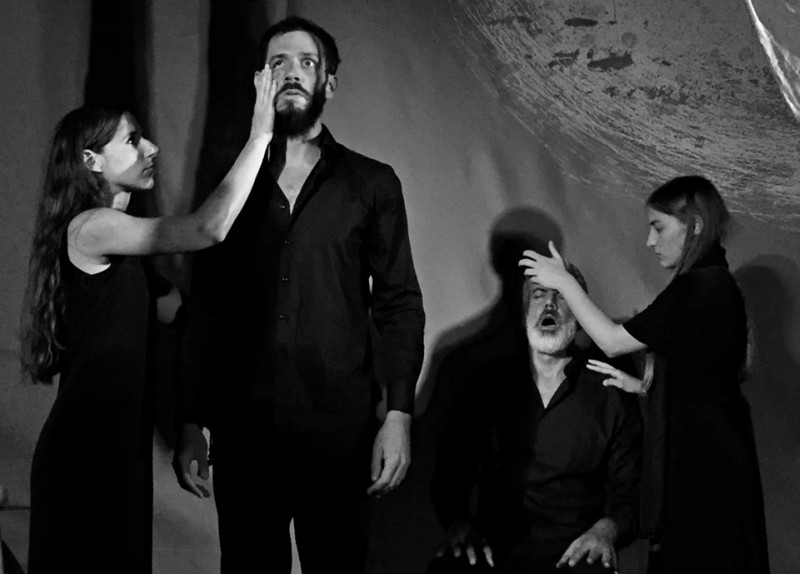 Your original score for the animation film "THE OX" by director Giorgos Nikopoulos was a nominee for the Best Soundtrack in Feature Film category, in the European Animation Awards "Emile Awards" 2018. Had you ever worked for a film before? What were the challenges of working for an animated feature?

The Ox was my first soundtrack for a full feature film and an animation film, so we were very happy with Giorgos Nikopoulos that our first collaborative work went so well on a national but even more an international level. There are extremely many challenges in working for an animated feature in that the music has a much stronger presence than in a normal film, especially if the animation has no dialogue – which was the case in The Ox. I think though that it helped immensely that Giorgos and I worked very closely on and "mapped" -minute by minute I dare say- the relationship between the film and the music, and that was very much appreciated in all the festivals the film went to.

Read also via Arts in Greece: Vassilis Karamitsanis "The Greek National Opera has decisively entered a digital path"; Composer Minas Borboudakis on his work in 21st-century classical music; Nikolas Karagiaouris on the past, present and future of Greek opera