As of September 2018, Dr. Gonda Van Steen takes on the Koraes Chair of Modern Greek & Byzantine History, Language & Literature at the Department of Classics of King’s College in London, at the same time assuming the directorship of the Centre for Hellenic Studies. Professor Van Steen is a devoted scholar and avid researcher of the language, literature and history of Ancient as well as Modern Greece, whose interests, research and publications cover a vast area, from Classics and Archaeology to chapters of 20th-century Greek history, obscure to most people outside Greece. 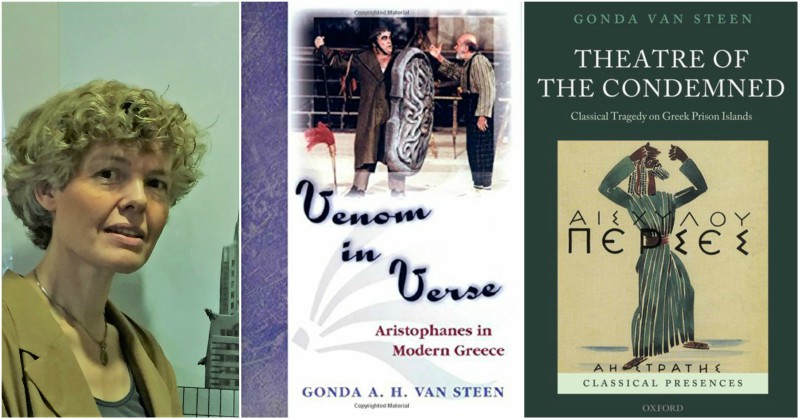 Having graduated with an M.A. in Classical Philology in her native Belgium, Van Steen continued her studies in the USA, where she went on to pursue a brilliant academic career. She is the current holder of the Cassas Chair in Greek Studies at the Department of Classics and Center for Greek Studies of the University of Florida. She is also an esteemed member of the Modern Greek Studies Association of North America, where she served as President (2012-14) and currently holds the position of Executive Director. Apart from her knowledge of Ancient Greek, Gonda Van Steen is also fluent in five modern languages, including Greek.

The modern interpretation of classical theatre has been a major theme in several of Van Steen’s publications, such as Venom in Verse: Aristophanes in Modern Greece (Princeton University Press, 2000), which was awarded the London Hellenic Prize, and Theatre of the Condemned: Classical Tragedy on Greek Prison Islands (Oxford University Press, 2010) which discusses the production of ancient tragedies by the political prisoners of the Greek Civil War. Her current book project, Adoption, Memory, and Cold War Greece focuses on Greek adoption stories that become paradigmatic of Cold War politics. Professor Van Steen spoke* to Greek News Agenda about her interest in Ancient and Modern Greek culture, and the ways these can affect our perspective today.

How did your interest in the Ancient Greek language and literature begin?

As a teenager, I was interested in the myths and monuments of Greece. That fascination led me to the Ancient Greek language, itself the key to Ancient Greek literature, which I have loved ever since. I studied classical languages through middle and high school, and I continued on in college in Belgium and through graduate school in the United States. But my interest really piqued as soon as I was able to travel to Greece, which is also what opened my eyes to the need to study Modern Greek. Since my first trip to Greece in the early 1980s, I have fostered a lifelong fascination with all things Greek, starting with the Classics and with archaeology, language, and literature, to then discover Byzantium, Modern Greece, and the complexities of their contemporary histories and cultures. 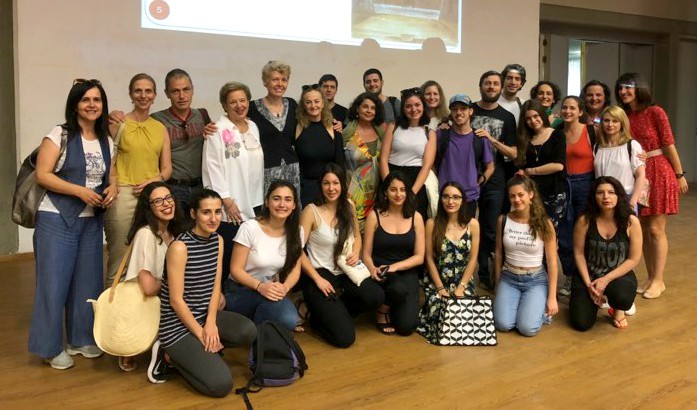 Gonda van Steen with staff and students after an open workshop at the Faculty of Theatre Studies, UoA in June 2018

So it was through your classical studies that you discovered Modern Greece. However, although many non-Greek nationals engage in the study of Ancient Greek Culture, few have examined the intricacies of 20th-century Greek history.

Indeed, I followed the path of the classicist who discovers the richness of the Modern Greek language and culture. For me, however, that encounter with contemporary Greece was a path of no return, and I threw myself wholeheartedly into the study of everything Modern Greek but especially of the theater, history, and politics of twentieth-century Greece.

You don’t hesitate to explore sensitive issues, such as the recent history of Greece: the military dictatorship and the Civil War, a touchy subject for many. Is your interest in the political as strong as your love for the artistic and cultural aspects of Modern Greece?

I like to approach Greek politics from a somewhat oblique angle, such as through the lens of theater, which I see as a mirror of and on contemporary society and intellectual life. Also, I find myself attracted to topics that have not yet been properly explored, such as the theater of the prison islands of the Greek Civil War, or the performance and censorship phenomena of the Greek military dictatorship. Overall, I shy away from “loud” politics, but I relentlessly pursue the study of the impact of politics and the arts on the margins.

One particularly interesting publication of yours was Theatre of the condemned, a study on the performance of Greek tragedies by political prisoners in Greek internment camps during the Civil War period. How did this subject come to your attention, and what can be learned through this research?

I had read bits and pieces about theater productions staged on the prison islands of the Civil War and its aftermath. But I felt that these performances needed to be studied in their own right, not as vehicles for partisan political comments. That is how I started to read historical and political works on the time period in question and also many memoirs written by the political prisoners themselves. In addition, I conducted numerous interviews with former detainees and was constantly struck by how they felt that theater and culture, and the group collaborations they required, had sustained them through one of the most trying ordeals of their lives. I learned that, among the isolated or the “condemned,” the collective effort that a theater production demands, can be one of the most inspiring and also gratifying commitments.

You are currently studying another issue linked to that era: the mass international adoptions of Greek-born children by USA citizens in the 1950s and 1960s, a fact unknown to many. You have actually been involved in this issue in a more personal manner, rather than purely academic – what made you passionate about it?

I started pursuing the topic of the Greek-to-American child adoptions as another inroad into the politics of mid-twentieth-century Greece. But I soon discovered how much potential this international adoption movement, as a historical and again understudied phenomenon, holds for a deeper engagement with the (most intimate) social history of postwar and Cold War Greece. I offer a historical study of the what, why, and how of this Greek adoption movement that placed hundreds of children in the USA and also in the Netherlands. I delve into Greek, American, and Dutch archives to present a complete historical record. Once again, however, I enrich this study with, and I have personally been much enriched by, the many conversations with Greek-born adoptees, now American and Dutch adults who are looking for their roots in the home country to which they have never been thoroughly exposed. These adoptees’ quests and their first adult experiences of Greece open up a chapter in transnational studies and in “life writing” that is again worth investigating, by lifelong students of Greece and by the broader public alike.

You have recently been appointed to be the next Koraes Professor of Modern Greek & Byzantine History, Language & Literature at King’s College, London. What do you hope to contribute to this position? You stated that you intend to “delve deeper into twentieth-century Greek social history”.

At King’s College, I hope to offer courses in reception studies, language, and literature, and I will indeed delve deeper into twentieth-century Greek social and family history. I am excited to start working with graduate students and colleagues in KCL’s Centre for Hellenic Studies, and I aim to build bridges across UK campuses, to the Greek diaspora community in Britain, and also to the rest of Europe, while maintaining professional contacts with colleagues in the USA.

My prior book and article publications have foregrounded Modern Greek receptions of the Classics. Most recently, I published Stage of Emergency: Theater and Public Performance under the Greek Military Dictatorship of 1967-1974. My current book project, entitled Adoption, Memory, and Cold War Greece, is the above-mentioned Greek adoption ethnography, which is set against the backdrop of the global Cold War. This project is taking me into the new, uncharted terrain of Greek adoption stories that become paradigmatic of Greek postwar history and international Cold War politics. 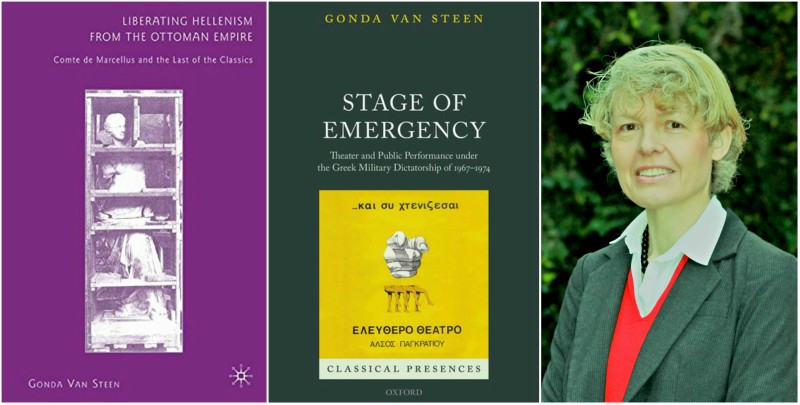 What do you believe the study of the social history of Modern Greece can offer to people from the rest of Europe and the world?

The study of Modern Greece and of its social history, especially, is one that offers deep perspective, a rich vantage point of comparison, and also a complex warning signal of how to read and what to negotiate (or avoid) when it comes to state or private interventions (whether the handling of the current economic crisis or the condoning of the mass adoption movement of the postwar past).

You are the Executive Director -and also a former President- of the Modern Greek Studies Association, a US-based institution aiming to “showcase the merits of the Modern Greek tradition and contemporary Greek culture”. Would you share with us a few words about the MGSA’s initiatives and the ways it advances research in this field?

The Modern Greek Studies Association of North America functions as a professional organization of all those involved with the study of contemporary Greece and Cyprus. The MGSA’s journal, the Journal of Modern Greek Studies, is a highly acclaimed, peer-reviewed periodical that features scholarship across various disciplines but always related to the Modern Greek world. It is a truly interdisciplinary journal, and that cross-disciplinarity is also reflected in the spirit in which our biennial symposia, or three-day conferences, are conducted. The latter feature presentations by neohellenists from across the globe and also promote the participation of graduate students in the field of Modern Greek Studies. The MGSA further functions as a clearinghouse of information related to the field and devotes special attention also to the teaching of Modern Greek as a second language. The association was founded in 1968 and celebrates its fiftieth anniversary this year.

Read also via Greek News Agenda: 100 years from the founding of the Koraes Chair at King’s College, London; Rethinking Greece: Roderick Beaton on the study of Greece and modern Greek achievements; An Englishwoman in Evia: Publisher Denise Harvey on her love for Greek literature and culture