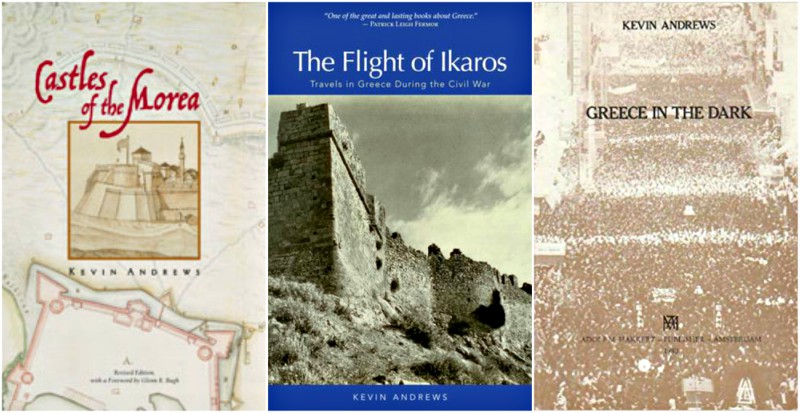 Kevin Andrews (1924-1989) was an American scholar and writer, and an ardent philhellene whose passionate love for Greece defined the course of his life. He remains most famous for his bestselling book The Flight of Ikaros: a journey into Greece (1959) where he recounts his experiences travelling in then little-known parts of the country at a time of political unrest and civil war; he had however penned several books about various aspects of Greece, where he spent the better part of his life.

Andrews was born in China to an English father and American mother; he served as a private in the US Army in World War II, taking part in the Italian Campaign. In 1947, he received an honours degree in Classics and American Literature at Harvard, and later that year he was granted a traveling fellowship from the American School of Classical Studies at Athens (ASCSA).

It was a time of civil war, yet Andrews was happy to receive a Fulbright Fellowship to remain in Greece and study the medieval fortresses of the Peloponnese (the Greek peninsula also known as Morea). Even though traveling alone in the steep mountain ranges was not without danger, especially since he had began experiencing seizures due to epilepsy, he was thrilled by the challenge of this yet unsearched field of study. In the Gennadius Library of the ASCSA he found a unique collection of 17th-century fortification plans, and devoted the next four years of his life to a historical and archaeological investigation of the castles they depicted.

In his travels around the Peloponnese, Andrews got to really know the landscape, the history of the place as well as the locals. The fruit of his research was the publication Castles of the Morea (1953), a pioneer study based on bibliographical research as well as first-hand documentation. His experiences also served as the raw material for The Flight of Ikaros (which has just been translated in Greek), a work which the famous writer, philhellene and personal friend of Andrew’s, Patrick Leigh Fermor, praised as "one of the great and lasting books about Greece", and “the most brilliant and penetrating book on the bitter and often tragic aspects of Greek rustic life to come out since the war”.

Kevin Andrews temporarily moved back to the USA, and later returned to Greece after his marriage to the daughter of E.E. Cummings, Nancy Thayer. He embraced the political ideas of the Left, and was a vocal critic of U.S. policy at the time, denouncing what he perceived as American interventionism. He chose to remain in Greece even during the military junta, despite his family leaving the country, and in fact relinquished his US citizenship to obtain the Greek nationality in 1975, after the dictatorial regime had fallen. This grim period of modern history was described in his 1980 book Greece in the dark : 1967-1974, where he also writes about his own participation in the revolts against the “Colonels”.

Other books concerning the history of later and modern-day Greek history include the guide Cities of the World: Athens (1967), the anthology Athens Alive, or The Practical Tourist’s Companion to the Fall of Man (1979) and the privately published poetic work Byzantine Blues: A Cradle-Song For Neodemocracy (1980). Andrews spent his last decade living the life of a recluse in a small apartment in Athens. In 1989, visiting the island of Kythera (off the coast of Peloponnese) with his last companion, Kevin Andrews drowned attempting to swim the distance to a nearby islet.

Read also via Greek News Agenda: An Englishwoman in Evia: Publisher Denise Harvey on her love for Greek literature and culture; Between peasants & intellectuals: Patrick Leigh Fermor’s Greek friends; Henry Miller: On friendship, light and a paradise lost in Greece; Meet “The Durrells” in Idyllic Corfu!; Greek Seas: A photographic journey in time